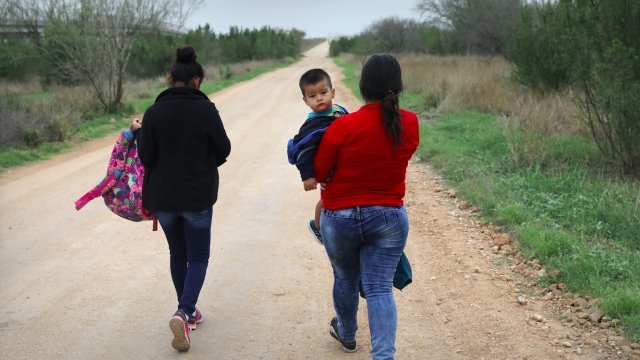 SMS
WaPo: Officials Recommend Prosecuting Immigrant Parents
By Jake Jones
By Jake Jones
April 26, 2018
A memo reportedly claims this strategy was deployed on part of the U.S.-Mexico border for a few months in 2017.
SHOW TRANSCRIPT

Top officials in the Trump administration are pushing for parents entering the country illegally with children to be detained and prosecuted, according to The Washington Post.

The Post obtained a memo of the proposal sent to Homeland Security Secretary Kirstjen Nielsen. The acting director of Immigrations and Customs Enforcement, director of Citizenship and Immigration Services and the Customs and Border Protection commissioner all signed that memo.

The memo reportedly claims this strategy was deployed on part of the U.S.-Mexico border for a few months in 2017. Families attempting illegal entry reportedly dropped by 64 percent.

The Post also reported immigrants who turn themselves in and claim asylum would not be prosecuted under the proposed policy.

An obvious concern if this policy goes into place would be the separation of children from their parents. The Department of Health and Human Services confirmed to The New York Times that about 700 kids had been taken from adults claiming to be their parents since October. But the department said it only does that in the interest of the kids.