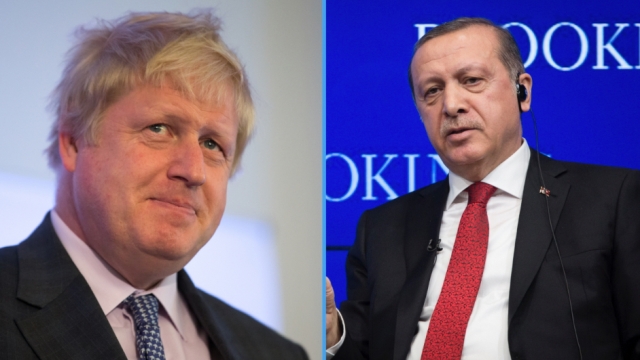 We're not going to repeat the whole poem here — suffice to say Johnson rhymed that Erdogan was sowing his wild oats with a certain cloven-hoofed animal.

The contest was in response to what happened to German comedian Jan Böhmermann — who read a satire about Erdogan on TV.

Erdogan didn't get the joke and in April, called for the comedian to be prosecuted. On Tuesday, a German court filed an injunction against Böhmermann.

As for Johnson, he also was rewarded the equivalent of about $1,400 for his latest limerick. He was reportedly shocked that he was even entered in the contest.

That's because Johnson said it during a newspaper interview.

But come on, Johnson. You can't call Erdogan a "wankerer" and not expect to be entered in an offensive poetry contest.

This video includes clips from Presidency of the Republic of Turkey, U.K. Parliament, ZDF and Vote Leave and images from Getty Images.