Want A Day Off After The Super Bowl? Maybe Vote For John Kasich 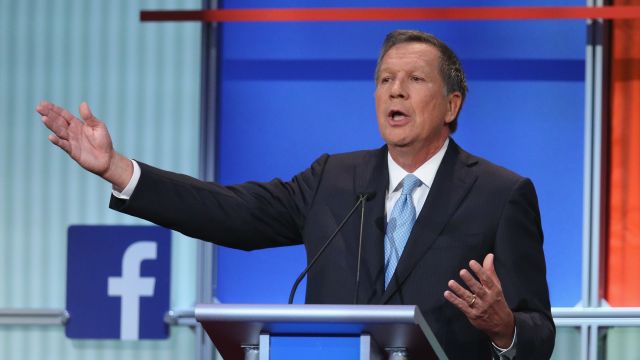 We're pretty deep into the 2016 election cycle, but that doesn't mean we can't learn some new positions from the candidates. Take this stance from Republican John Kasich on the day after the Super Bowl.

"I think it should be," Kasich said. "I'm going to take that under consideration. Maybe I could get that done in the first hundred days."

That was the Ohio governor making his position clear on "The Dan Patrick Show." His reasoning? Folks aren't productive the next day at work anyway.

The numbers back this up. One survey found about one in 10 American workers considered skipping work the day after the big game, with over 10 million people taking the day off in advance.

To be fair, it's not like Americans always put work ahead of watching sports. March Madness just ended, and that cost employers a reported $3.9 billion, though that estimate could be a little high.

In any case, there's evidence Americans would probably be fans of the day off if a President Kasich gave it to them. One 2013 petition in favor of the national holiday earned over 17,000 signatures on the White House's website.

Remember, Trump called Super Bowl 50 "very boring" on Twitter during the game and has complained in the past that football has "become soft" thanks to the NFL's penalties for hard hits.

Whatever bump Kasich might get from NFL fans probably wouldn't mean much in the Republican race. He's still facing his own form of a third-and-long scenario — as in third place and a long way out of first.

This video includes clips from Kasich for America, "The Dan Patrick Show," NBC and images from Getty Images.