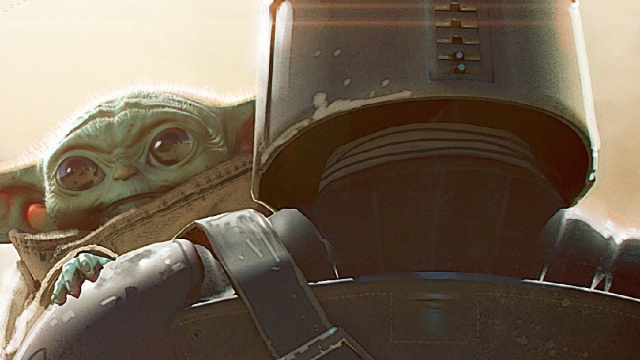 SMS
Wanna Buy A 'Baby Yoda' Toy? We've Got Some Bad News.
By Casey Mendoza
By Casey Mendoza
December 10, 2019
This year's hottest toy doesn't (officially) exist yet — and it won't be ready for Christmas.
SHOW TRANSCRIPT

"The Child" from "The Mandalorian" — better known as "Baby Yoda" — is all over the internet right now through memes, fan art and even a viral song. ["Baby Yoda. Baby baby Yoda."]

But despite the child's fame, the new character doesn't exist IRL yet.

Officially licensed "Baby Yoda" collectibles, figurines and plush toys won't be available until the spring of 2020.

"I have to thank Disney and LucasFilm, because the way the cat usually gets out of the bag with that stuff is merchandising and toy catalogs and things like that."

Apparel, phone cases and mugs were available soon after the series' debut. And that's because those items take less time to design, produce and ship than toys and figurines. The only problem is that you can't really cuddle with a T-shirt.

This demand goes to show that the industry is growing, but the amount of time that goes into designing and then shipping a toy or collectible isn't necessarily rapid-fire.

When "Guardians of the Galaxy" came out in 2014, Funko was the very first company to release an official "Dancing Groot" collectible. It was unveiled 22 days after the movie's release, but it wasn't available to buy until four months later.

This year, Funko again was one of the first official merchandisers for "Baby Yoda," but its collectibles won't be available until May of 2020 — six months after the debut of "The Mandalorian."

That may seem like a long time for people who are used to the instant gratification of online shopping and two-day shipping, but it's pretty par for the course.

Funko told Newsy that its fastest turnaround from creation to shipment was 70 days. Considering how long it takes to create a toy, delaying the process likely cost Disney some holiday sales.

"I guarantee this decision cost them between 50 and 150 million dollars. So, it's just another great example about how Disney does not put profit ahead of everything else."

That's Brian Volk-Weiss, self-proclaimed Star Wars nerd and creator of the Netflix docu-series "The Toys That Made Us."

While fans wait for official collectibles, smaller unofficial merchandisers are jumping at the opportunity to fill the Baby Yoda void with unlicensed goods. The earliest fan-made products we found on Etsy were listed mere days after the character's introduction.

An Etsy spokesperson told Newsy: "Because Etsy sellers produce small-batch items and have the shortest supply chain in the market ... they are able to quickly adapt their products to reflect emerging and viral trends ahead of large retailers."

Despite that advantage of speed, buyers do have to be wary of fake collectibles, stolen art and re-branded Yoda toys from past Star Wars titles. Creators and independent sellers, meanwhile, are at risk of legal copyright action from Disney.

To give an example, this one crocheted "Baby Yoda" toy went viral earlier in November. On Ebay, it was selling for more than $1,000 until it disappeared from the platform and the artist's social media just days later. The creator of the toy could not comment on the disappearance.