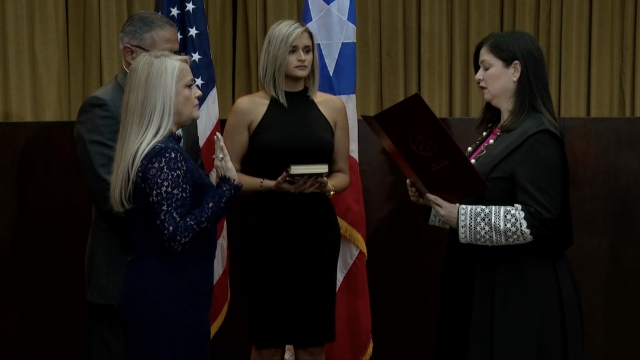 Wanda Vázquez is Puerto Rico's new governor. She was sworn in Wednesday after the island's Supreme Court ruled Pedro Pierluisi's swearing-in was invalid.

In a statement, Pierluisi wrote, "I wish the Honorable Wanda Vázquez Garced the greatest success as Governor of Puerto Rico."

Being secretary of justice made Vázquez legally next in line for governor, according to Puerto Rico's constitution.

She became secretary of justice in 2017. In a statement Wednesday, she announced she would take over the governor's office. However, she previously said she wasn't interested in the job.

The people of Puerto Rico forced former Gov. Ricardo Rosselló to resign after weeks of mass protests over his participation in a group chat with offensive messages.

Vázquez described the group chat as "incorrect" but not illegal. She also said she would recuse herself from any investigation because she was mentioned in the chat.

Last month, local outlets reported the Office of Government Ethics will investigate conversations between Vázquez and another official about why she decided not to look into allegations of resource mismanagement after Hurricane Maria.

It's unclear whether Vázquez will run for governor in the upcoming 2020 election. In March, Carmen Yulín Cruz, the mayor of San Juan, said she'd run for governor as a member of the Popular Democratic Party, or PPD, which opposes Puerto Rican statehood.