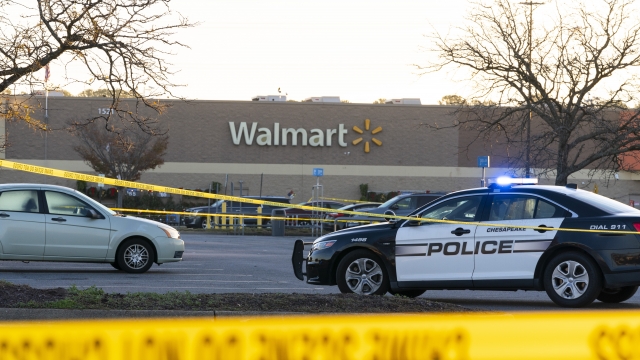 SMS
Walmart Mass Shooting Could Affect Retailers And Consumer Confidence
By Bianca Facchinei
By Bianca Facchinei
November 23, 2022
The mass shooting at Walmart on the week of Thanksgiving and Black Friday could impact retail and consumer confidence.

Retailers are typically filled to the brim this time of year, with shoppers stocking up until the store closes. But with yet another mass shooting taking place two days before Thanksgiving at a major retailer, businesses could face heightened security concerns.

The company known as the world’s largest retailer is expecting holiday sales to increase by 3% this year. That’s in part due to a widening customer base after stubborn inflation attracted customers from higher income levels.

"The public is going to likely be on edge on Black Friday when they go out and shop, and there's going to be a lot of presence of law enforcement, I anticipate, throughout the United States," said Alex del Carmen, a criminology professor at Tarleton State University.

It’s unclear if or how Tuesday’s shooting may impact sales, but the last time this happened Walmart responded with a change in business. Back in 2019, 23 people were killed and dozens were injured in a mass shooting at a Walmart in Texas. A month later, the company announced it would stop selling ammunition for handguns and assault rifles — and asked that customers no longer openly carry firearms in the store.

The Walmart shooting is the 36th mass shooting in the U.S. to take place in a retail establishment, according to the Violence Project, a non-profit research center who's been tracking data since 1966. The group says shootings at stores have claimed 217 lives and injured 227, have been increasing and are more common in southern and western states.

"We've seen a correlation, a relationship between economic difficult times and violence in the United States and throughout the world. So, as we are facing perhaps some sort of a recession coming up, as we see all these economic uncertainties, there is a likelihood that this violence trend is going to continue," said del Carmen.

In the initial hours after the shooting, Walmart put out a brief statement on Twitter, writing "we’re working closely with law enforcement, and we are focused on supporting our associates."