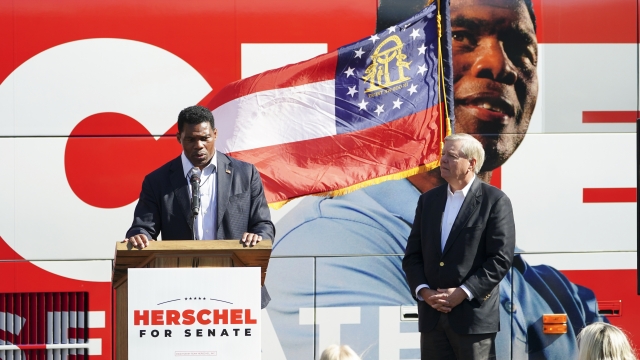 Walker insisted his position is the same as Georgia's state law, the so-called heartbeat bill that bans abortion at six weeks.

Republican Senate candidate Herschel Walker on Friday denied his previous support for an outright national ban on abortion, making the shift in his lone debate against Democratic Sen. Raphael Warnock.

Walker, a staunch anti-abortion politician recently accused by a former girlfriend of encouraging and paying for her 2009 abortion, accused Warnock of misstating his position by saying Walker had supported a national ban on abortion, without exceptions.

Walker insisted his position is the same as Georgia's state law, the so-called heartbeat bill that bans abortion at six weeks, before many women know they're pregnant.

But Walker had insisted at various points throughout the campaign that he supported a national abortion ban, without exceptions. “That’s a problem” that there is no national ban, he said at a campaign stop in July.

But on the debate stage, Walker tried to shift the question to Warnock. Walker blasted Warnock for being a Baptist pastor who supports abortion rights.

“On abortion, you know, I’m a Christian. I believe in life. ... I’ll be a senator that protects life,” Walker said, later suggesting that Warnock doesn't care about abortions in the Black community. Both men are Black.

Warnock insisted he can support abortion rights as a Christian and as a pastor. “God gave us a choice and I respect the right of women to make a decision. These are medical decisions, they are deeply personal,” Warnock said, adding that Walker “wants to arrogate more power to politicians than God has."

The debate in Georgia's marquee Senate contest was held just days before in-person early voting begins Monday. The outcome will help determine which party controls the Senate for the next two years of President Joe Biden's term.

The matchup is forcing both men to answer attacks — personal and political — that have flooded voters’ television screens and social media feeds for months.

Warnock and fellow Georgia Democrat Jon Ossoff won their Senate seats in a January 2021 special election two months after Biden won Georgia by fewer than 12,000 votes out of 5 million cast. That was the first time in two decades Democrats won federal elections in the historically conservative state, raising questions about whether Warnock can replicate his victory in a midterm election, especially with Biden’s popularity down among Georgia voters.

Walker has seized on that landscape, caricaturing Warnock as a rubber-stamp for the administration. Warnock’s answer has been to emphasize legislative accomplishments in Washington, with a focus on provisions he sponsored capping insulin and other health care costs for Medicare recipients, Democrats’ extension of the child tax credit and infrastructure provisions that Warnock shepherded with Republican colleagues.

A major variable in the debate is how aggressively Warnock chooses to directly attack Walker on various allegations and disclosures that have surfaced throughout the campaign. The senator typically has defaulted to his broad assertion that Walker is ill-prepared for office. But debate moderators brought the men into direct conflict on everything from their economic policies to their relationships with their children and families.

Recent reporting by The Daily Beast disclosed records of an abortion receipt and a subsequent personal check from Walker to a woman who said the celebrity football icon paid for her abortion when they were dating. Walker continues to deny the reports, even after the woman identified herself as the mother of one of his four children.

Other reports, including from The Associated Press, have detailed how Walker has exaggerated his academic achievements, business success and philanthropic activities, as well as accusations that he threatened the life of his ex-wife that go beyond details Walker himself acknowledged in a 2008 memoir and subsequent media interviews. Walker also acknowledged three of his children publicly for the first time only after earlier Daily Beast reporting. Before his Senate bid, he’d spoken publicly only of Christian Walker, his adult son by his first wife.

Walker, as is typical of challengers battling incumbents, has proved much more eager to go after Warnock directly even before the debate. Citing Warnock’s Senate financial disclosures, Walker blasts Warnock as using the Senate to get rich. Warnock reported income from a book deal after his Senate election. He also reported a monthly housing allowance from Ebenezer Baptist Church in excess of $7,000 — an arrangement that allows Warnock to continue receiving a considerable annual sum from the church for his role as senior pastor without violating federal ethics rules capping senators’ outside income.

National Republicans, meanwhile, have recently aired ads highlighting Warnock’s personal life. One ad references a March 2020 incident in which Warnock’s then-wife, Oulèye Ndoye, told police he ran over her foot with his vehicle. Police records state that officers found no evidence that Warnock did so. The couple divorced before Warnock’s election to the Senate; they share two young children.

Walker himself has avoided attacks on Warnock's family life, though he campaigned earlier this week with Sen. Rick Scott of Florida, who chairs the Senate GOP’s campaign arm that paid for some of those ads.

The Savannah debate was the two rivals' only meeting because Walker declined to accept the three fall debates typical in Georgia campaigns. Warnock accepted that slate of proposed debates in June, only to have Walker balk and counter with Friday's debate. The Friday debate did not include Libertarian Chase Oliver, who did not meet organizers' polling threshold.

Just one of those original three debates is still scheduled: Warnock will meet Oliver in a Sunday session sponsored by the Atlanta Press Club. In that debate, Walker will be represented by an empty podium because he declined the invitation.