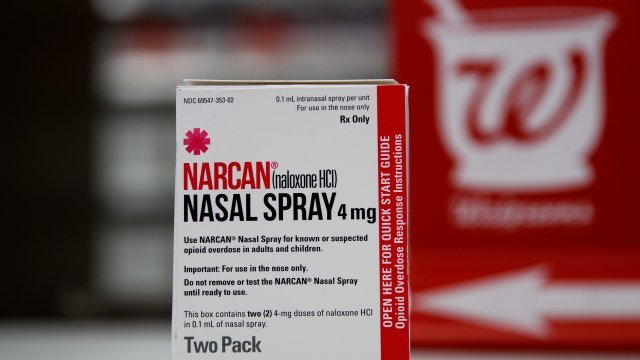 Walgreens says it will stock naloxone in all of its more than 8,000 U.S. locations.

A drugstore chain is joining the fight against the opioid epidemic, making an opioid overdose reversal drug available without a prescription in all of its stores.

Walgreens announced it will carry Narcan in all of its more than 8,000 pharmacies across the U.S.

Narcan nasal spray, a form of the drug naloxone, was approved by the U.S. Food and Drug Administration in 2015.

When administered, it can quickly counteract the effects of an opioid overdose.

According to the Centers for Disease Control and Prevention, the number of U.S. overdose deaths involving opioids quadrupled between 1999 to 2015.

An Ohio sheriff won't ask his deputies to administer Narcan, a drug used to treat opioid overdoses, due to safety concerns.

The FDA said in 2016 it was working to make the drug more widely available.

Some schools and law enforcement agencies keep naloxone on hand, but programs vary by state.

Narcan is also available without a prescription at most CVS pharmacies in 41 states and at Rite Aid in 25 states.