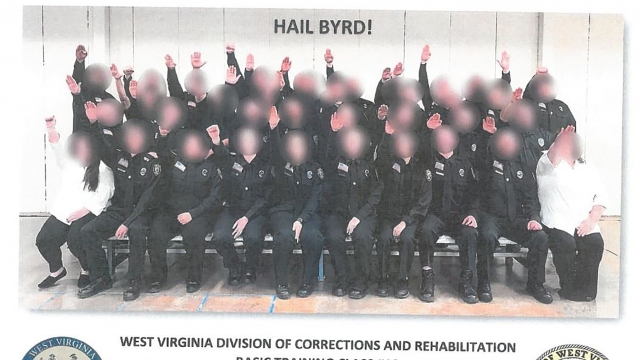 West Virginia Gov. Jim Justice signed off on firing every correctional officer cadet who appeared to give a Nazi salute during a class photo.

In a statement, Justice said, "This act needed to result in real consequences — terminations and dismissals. This kind of behavior will not be tolerated on my watch in any agency of State government."

The West Virginia Department of Military Affairs and Public Safety publicly released the photograph in early December. In addition to the more than 30 cadets who have their arms raised in a salute, the words "HAIL BYRD" are written overhead.

According to an investigation into the photo, the cadets began using the hand gesture several weeks into their training as a "sign of respect" for a person identified as "Instructor Byrd." Bryd told investigators she was "unaware of the historical or racial implications of the gesture." But the report says her interview was "heavily contradicted by multiple sources during the investigation."

Byrd reportedly directed the cadets to make the arm gesture during the photo session. Some cadets told investigators they only followed the order because "they feared they would not graduate, or would be disciplined for failure to follow the order of a superior."

Besides approving the recommended termination of the cadets, Justice also approved firing a training academy staff member who did not report the photo.