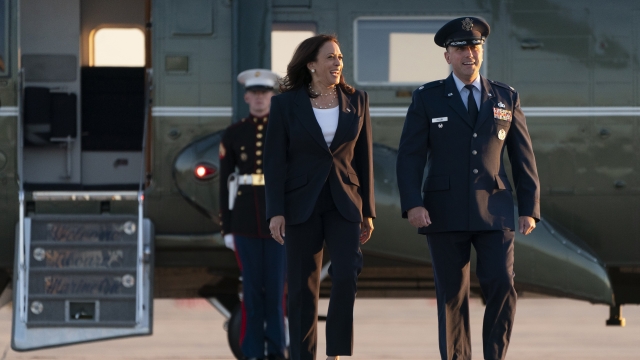 Vice President Kamala Harris will make her first visit on Friday to the U.S.-Mexico border since taking office, following criticism from members of both parties for failing to go earlier despite her role leading the Biden administration’s response to a steep increase in migration.

Harris has faced months of criticism from Republicans, and even some frustration from those in her own party, for not visiting the area.

She was tasked earlier this year by President Joe Biden with taking on the root causes of migration from Central America to the United States, and so far she's focused largely on outreach to local leaders and advocacy groups with the goal of improving economic and living conditions in the region. Harris has said her goal is to offer residents of Guatemala, El Salvador, Honduras and Mexico hope for their future, so they no longer feel compelled to leave home for better opportunities.

Her aides have repeatedly insisted her efforts are distinct from the security issues that plague U.S. officials trying to handle a spike in border crossings. But Republicans have pointed to the failures by both Harris and Biden to visit the border to paint the administration as absent in a crisis.

Harris will arrive in the area just days before former President Donald Trump is to visit the border with a group of House Republicans and Texas Gov. Greg Abbott, and Trump is certain to use the opportunity to drive Republican attacks on Democrats as soft on immigration.

The border issue shadowed Harris’ first foreign trip earlier this month, to Guatemala and Mexico, where she met with both nations’ presidents and local officials to discuss economic and humanitarian solutions to the significant outmigration from both countries.

During that trip, she sat for an interview with NBC News in which she dismissed a question about why she hadn't made a trip to the border by responding, “I've never been to Europe,” and adding, “I don't understand the point you're making.” Harris and White House aides were subsequently forced to parry repeated questions about the decision and her remarks.

Harris said she was focused on “tangible” results “as opposed to grand gestures," but she also said she might visit in the near future.

It's unclear what Harris' plans include during her visit to the area, but one migrant detention facility in El Paso, at the Fort Bliss military post, has drawn criticism from advocates who have described unsafe conditions and allegations of abuse toward some of the thousands of children housed there.

U.S. Customs and Border Protection recorded more than 180,000 encounters on the Mexican border in May, the most since March 2000. Those numbers were boosted by a pandemic-related ban on seeking asylum, which encouraged repeated attempts to cross the border because getting caught carried no legal consequences.

The numbers have led even some centrist Democrats to join Republicans in their calls for Harris to make a trip to the area. Rep. Henry Cuellar, a Texas Democrat whose district stretches from south of San Antonio down to the southern border, wrote a letter to Harris earlier this month inviting her to “observe the ongoing humanitarian crisis and share the perspective of Americans who live there.”

And Trump's trip to the border marks another sign of how closely Republicans continue to align themselves with Trump and the extent to which they see the border as a winning campaign issue. The former president immediately took credit for Harris' trip, speculating in a statement that the vice president would not have made plans to go if he hadn't been headed there himself.