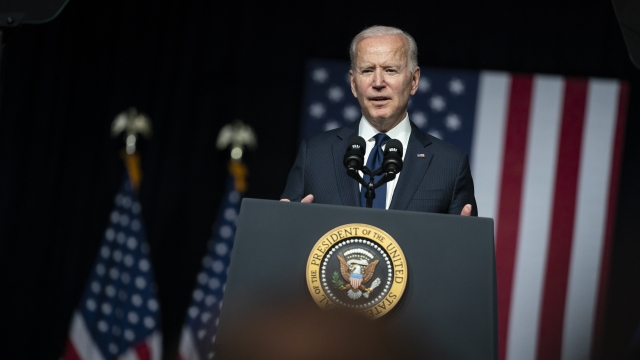 So far this year — just shy of 400 voting bills with "restrictive provisions" have been introduced in state legislatures. That's according to the Brennan Center for Justice which notes some of those bills also have provisions that would expand access.

President Biden said yesterday he's going to "fight like heck" to get two voting rights bills passed. One has already passed the House but doesn't look like it will have enough support in the Senate.

"This sacred right is under assault with incredible intensity like I've never seen — even though I got started as a public defender and a civil rights lawyer — with an intensity and aggressiveness we've not seen in a long, long time. It's simply un-American," the president said. "I urge voting rights groups in this country to begin to redouble their efforts now to register and educate voters."

He spoke while visiting Tulsa, OK to commemorate the 100th anniversary of the Tulsa race massacre.

In 1921 a white mob attacked and killed about 300 black people. The mob also looted and burned the thriving predominantly Black Greenwood neighborhood leaving about 10,000 people homeless.

"The only way to build a common ground is to truly repair and to rebuild. I come here to help fill the silence because in silence, wounds deepen." President Biden said. "We simply can't bury pain and trauma forever and at some point to be a reckoning, an inflection point like we're facing right now as a nation."

While in Tulsa the president unveiled his administration's efforts to improve access to home and small business ownership in communities of color. They include implementing stricter rules to fight housing discrimination, allocating $10 billion for community infrastructure projects, providing $15 billion in transportation grants to improve communities accessibility and increasing the federal government's hiring of small disadvantaged businesses.

The administration says doing so will bring an extra $100 billion to those businesses over five years.