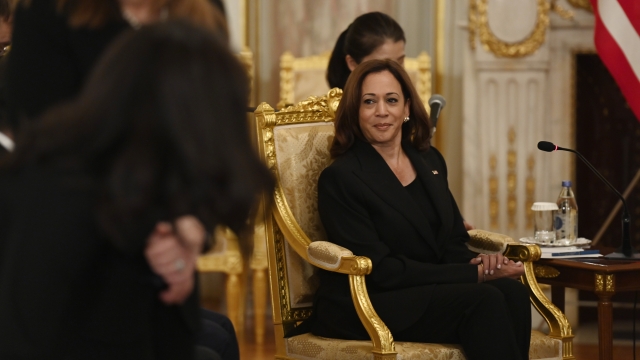 Vice President Harris, who is scheduled to spend three nights in Tokyo, is visiting at a politically fraught moment.

Abe, a former prime minister who was assassinated in July, will be honored on Tuesday, and Harris is leading a U.S. delegation to pay its respects.

"The alliance between Japan and the United States is a cornerstone of what we believe is integral to peace, stability and prosperity in the Indo-Pacific region," she said at the Akasaka Palace.

Kishida said Abe "poured his heart and soul" into strengthening ties between their two countries.

"I feel it is my duty to carry on his aspirations," Kishida said.

Abe forged closer ties with the United States at a time of increased concern about China's ambitions, and Kishida is continuing his push for a stronger national defense.

The potential for war over Taiwan, a self-governed island that China claims as part of its own territory, has troubled Japan, which would likely be pulled into such a conflict.

Abe was shot from behind after he started a campaign speech. Police arrested a suspected gunman at the scene of an attack that shocked Japan.

President Joe Biden said recently that the U.S. would send its own troops to defend Taiwan if China attacked.

"The president has addressed that issue. And if it comes up, the vice president will align with the president," said a senior administration official, who requested anonymity to discuss a private meeting.

The official also said Harris would "make clear our ironclad commitment to Japan's security." More than 50,000 U.S. troops are based there.

Harris, who is scheduled to spend three nights in Tokyo, is visiting at a politically fraught moment. Kishida's decision to hold a state funeral for Abe, a conservative nationalist, has been controversial in a country where such memorials are uncommon, and some oppose honoring him in this way.

Kishida is also pushing for a dramatic expansion of defense spending that would give Japan the world's third-largest military budget in the coming years, after the United States and China. A new national security strategy, the first in almost a decade, is in the works as well.

The debate is playing out as Japan reevaluates the risk of war after the shock of the Russian invasion of Ukraine, said Christopher Johnstone, senior adviser and Japan chair at the Center for Strategic and International Studies.

The fighting in Europe is a reminder that "conflict really is possible," he said, and "Japan lives in a pretty difficult neighborhood."

Japan is upgrading missiles and considering using them for preemptive strikes — a move critics say would fundamentally change the country's defense policy and breach the postwar pacifist constitution that limits use of force to self-defense.

It has also shifted its defense from the northeast to southwestern Japan, including Okinawa and other remote islands.