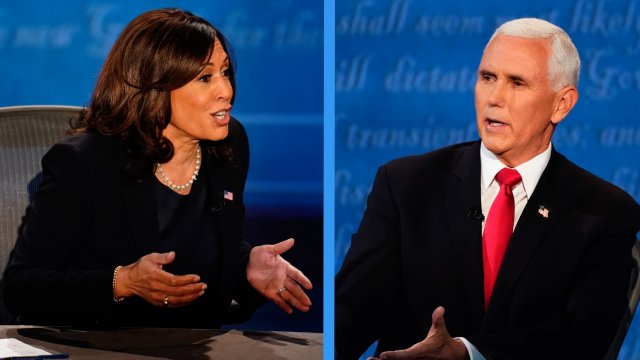 The first and only vice presidential debate took place Wednesday night with one issue overshadowing all others.

"We have to get a hold on what has been going on and we need to face our country, and Joe Biden is the best leader to do that, and frankly, this administration has forfeited their right to re-election," said Democratic vice presidential nominee Kamala Harris.

"I want the American people to know that from the very first day, President Donald Trump has put the health of America first," said Vice President Mike Pence.

The candidates sitting more than 12 feet apart, divided by plexiglass — a reminder of the continuing pandemic.

"The fact that you continue to undermine public confidence in a vaccine, if a vaccine emerges during the Trump administration, I think is unconscionable," replied Pence. "Senator, I just ask you to stop playing politics with people's lives."

The debate, though pointed at times, markedly more civil than the first presidential debate just over a week ago.

"Let's talk about who is prepared to lead our country over the course of the next four years on what is an existential threat to us as human beings," said Harris.

"2021 is going to be the biggest economic year in the history of this country," said Pence.

The focus now turns to the remaining 2 presidential debates — now in flux after President Trump's coronavirus diagnosis. The next of those is currently scheduled for October 15.