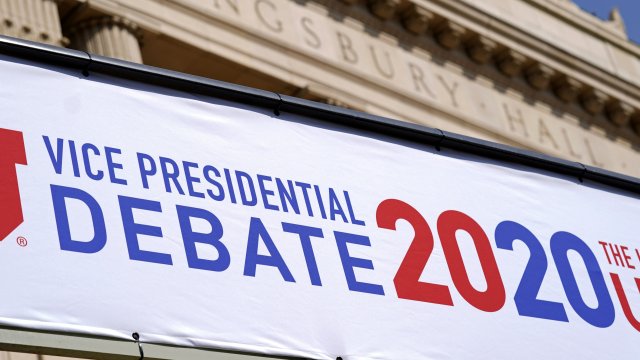 What is normally seen as the undercard debate is taking on a new importance in 2020, with Vice President Mike Pence and Sen. Kamala Harris squaring off as President Trump fights the coronavirus.

"President Trump, Vice President Biden are the two oldest major party, national candidates to ever run for the presidency, on a national ticket," said professor Joel Goldstein, author of "The White House Vice Presidency: The Path to Significance, Mondale to Biden."

"I think the fact anytime you have a presidential succession situation, it focuses attention on the vice presidency and on president succession," he added.

The wellness of the presidential candidates, both in their 70s, will be top of mind when their running mates meet on Wednesday. As well as Pence's role as head of the Coronavirus Task Force.

The candidates will be even farther apart than originally planned on the debate stage and separated by plexiglass. Pence has drawn criticism for continuing to campaign after being around a number of Republicans who have recently tested positive for the virus. A notion the campaign has rebuffed.

"We have a month to go. We see Joe Biden and Kamala Harris out there campaigning," senior Trump campaign adviser Jason Miller said on "Meet The Press" on Sunday. "Certainly they're not asking for a remote debate."

Harris and the Democrats have picked up in-person campaign activities in recent weeks, including plans to begin knocking on the doors of potential voters.

They enter the final month of the campaign with a firm lead in national polling, aided by the negative marks President Trump received after a combative first presidential debate. That is likely to only increase the pressure on Pence for a strong showing.

He'll take on a former prosecutor in Harris who participated in a number of debates during the Democratic presidential primary last year. But this is the first one she can expect to spend most of her time defending a record other than her own.

This debate here in Utah will be the only time the vice presidential candidates will go toe-to-toe. And with questions surrounding the future of the remaining two presidential debates, there is even the possibility this is the last face-off between the campaigns before election day… at least the last to take place in person.