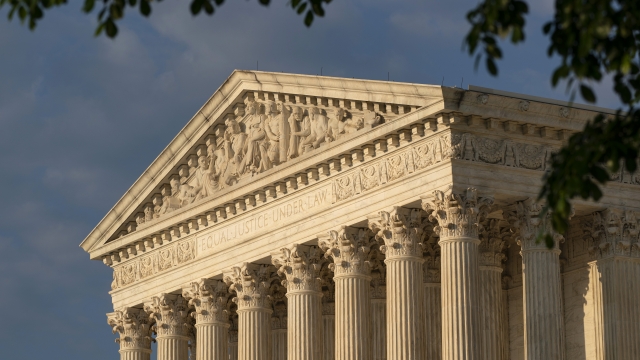 Section 2 of the Voting Rights Act has been a touchstone for fighting voter discrimination since 1982, but an Alabama case might threaten protections.

State voting laws are drifting in opposite directions in today's age of politics.

In 2021, 25 states passed laws that expanded voting access, but 18 states have passed nearly three dozen laws making voting more restrictive. Both those numbers are from the pro-voter access nonprofit the Brennan Center for Justice, which also points out that studies show those restrictions often burden voters of color.

Despite these restrictions and despite the Supreme Court weakening voter protections in recent years, one law has held steady: The Voting Rights Act, specifically Section 2.

But the Supreme Court is hearing arguments next week in a case from Alabama, and even that long-standing protection to voting rights is at risk of being weakened or eliminated.

Section 2 has been a crucial tool for minority communities to prevent voter discrimination. It bans voting laws or practices that discriminate based on race, ethnicity or protected language.

In 2013, the Supreme Court effectively gutted Section 5 of the Voting Rights Act that had required local election officials in areas with a history of discrimination to run their laws by the Justice Department first. Section 2 may be next.

For now, Section 2 holds strong, and it's stronger than it was when it was first written.

"In 1982, Congress amended Section 2 to make it easier for claimant plaintiffs to bring these cases," said Franita Tolson, USC law professor and election law expert. "So not just intent, but it also reaches effect if a law has a discriminatory impact, meaning that it disproportionately harms one group relative to another, then there's a potential Section 2 violation there."

Plainly, that means if a person is suing and alleging a violation of Section 2, they don't need to show a smoking gun that proves someone writing a voting law meant for it to discriminate. They just have to show that in practice, the law hurts a minority community a lot more than it hurts the public overall.

Jacqueline de León has dealt with this firsthand, while arguing voting rights cases for the Native American Rights Fund. The group has filed an amicus brief in the case that the Supreme Court will hear, and she points to Section 2 as a key legal tool at their disposal to fight cases of discrimination against Native American voters.

The Supreme Court is set to decide if Alabama violated the Voting Rights Act when it redrew Congressional maps.

"There's a lot of ways in which a map can be manipulated to dilute minority voting strength, and so Section 2 ensures that a vote is not diluted," León said. "What we see throughout Indian country and we've seen over this past redistricting cycle is that there are many different ways that mapmakers are trying to suppress the native vote, and and we depend on Section 2 to remedy that."

Section 2 has been used to challenge things like voter ID requirements and polling place closures, but the new Supreme Court case looks at issues in redistricting.

Josh Douglas, a law professor at the University of Kentucky and author of a book on the future of voting rights, explains.

"The state of Alabama drew a map, and the state's trying to justify the map that only has one of the seven districts as majority minority, yet Alabama has about 20 something percent of its population is Black individuals," Douglas said. "So the argument for the plaintiffs are, 'Look, we are a much larger constituency of the electorate. We should control at least two of the seven seats.' And you could because minorities live in a geographically compact area. You could easily draw a map that does that."

A federal court agreed: A three-judge Appeals Court panel unanimously ruled that Alabama's maps did violate Section 2, but the state has appealed. The Supreme Court issued a stay on the lower court's ruling, suggesting they may be inclined to side with Alabama.

The NAACP Legal Defense Fund will argue the case before the Supreme Court next week, challenging the state's maps.

Ashley Burrell, an assistant counsel with the fund, said that if the Court used this case as an opportunity to significantly weaken Section 2, that she thinks the consequences could be "absolutely devastating."

But the state is arguing in response that it didn't consider race when drawing the new map, denying that the law allows for considering race.

Hans von Spakovsky is a Heritage Foundation senior legal fellow and former Bush administration Justice Department official. He thinks Alabama has the better side of this argument. He says that given the way voters split along political lines, it's easy for redistricting on political lines to be interpreted as racially motivated.

"In many places, upwards of 95% of African Americans vote for the Democratic Party," von Spakovsky said. "It's often hard to distinguish motives that are based purely on partisanship with motives that are based on race. In other words, if a legislature, for example, wants to draw up a district, that's going to pretty much guarantee the Democrats are elected. If they draw up a district in which a majority of the voters are African American, well that just may be a coincidence. Is that racist when they do that, if their aim is politics, not race? That's that's sometimes difficult to distinguish."

Voting options are narrowing, and the voting process is getting tougher as many states put tighter restrictions in place.

This would be a big shift from how Section 2 has been applied in practice. Section 2 does direct map drawers to consider race to ensure equal opportunity for participation for minority voters. Alabama is arguing that considering race at all makes it the primary factor. So, a ruling in Alabama's favor could lead to court challenges trying to prove discrimination, having to prove that discrimination in a race-neutral way.

In other words, it would mean proving discrimination without considering race.

"How would you, from a practical perspective, draw a new map as a plaintiffs to say you could draw a map with better minority representation, but not get to think about where minorities live?" Douglas said. "It'd be a very hard thing to do. It would really make it very difficult for plaintiffs to win these kinds of cases."

The Supreme Court may be looking at the Constitution in a way that downplays the role of race. That would be in line with how the Framers looked at it when the Bill of Rights was written, but there have been times when that stopped being true, including for amendments adopted after the Civil War.

"If you look at the adoption of the reconstruction amendments — 13th, 14th and 15th Amendments — they were very much adopted with a particular demographic in mind, which was the formerly enslaved African Americans in this country and improving their position," Tolson said. "So in some ways, this commitment to a colorblind constitution is a relic of a constitution that doesn't exist anymore."

But the Supreme Court may lean toward von Spakovsky's argument here that there should be a higher, more race-neutral threshold to prove discrimination. The court has already allowed the original maps that were ruled as discriminatory to be used until it makes its final ruling.So this court case could rewrite Section 2 to make it harder for minority communities to prove racial discrimination.