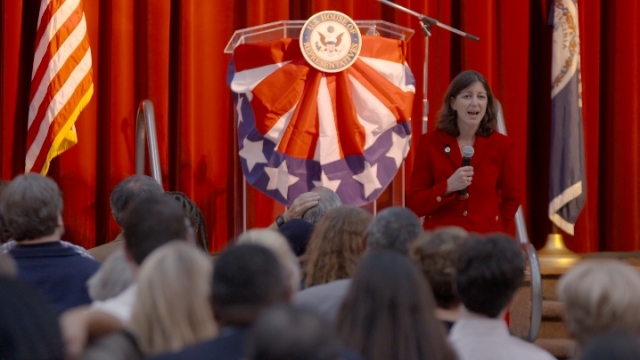 SMS
Voters React to Moderate Democrats Call for Impeachment
By Kellan Howell
By Kellan Howell
October 7, 2019
Rep. Elaine Luria is one of 31 Democrats representing House Districts Trump carried in 2016. Now she's calling for his impeachment. Will it backfire?
SHOW TRANSCRIPT

At a church in Virginia Beach, moderate Democratic Rep. Elaine Luria hosted her first town hall meeting with constituents since she called for an official impeachment inquiry into President Donald Trump.

"I understand that, you know the district I represent, may typically, this seat may typically be held by a republican. People might say, 'Well, why would you do that? You might not get reelected.' I don't care because I did the right thing," Luria told voters. She was met with loud applause and a standing ovation.

Luria's decision to back the impeachment inquiry was particularly meaningful.

President Trump won her southeastern Virginia congressional district by three points in 2016. That year GOP congressman Scott Taylor also handily won a House seat with more than 60% of the vote. But Luria flipped the seat blue in the 2018 midterms, defeating Taylor by just two points.

Now Luria is one of 31 House Democrats representing districts won by Trump. And their support was vital in House Speaker Nancy Pelosi's decision to proceed down the path to possible impeachment. It also could make them vulnerable in the 2020 election.

But the audience at Luria's town hall rallied behind her decision.

"I think she is following the rule of law," said Cara Eggers, a 48-year-old psychologist from Virginia Beach.  "Like she has said, it's not political. It's about following the Constitution and enforcing things that are part of the Constitution.  Whether it costs here politically or not, she is doing the job that she signed up to do and I respect that very much."

Susan Potter and her husband Eric, both Virginia Beach retirees, said they're seeing members of their typically conservative community changing their tune on impeachment.

"I don't think they agree with me as a Democrat, necessarily. But this is a military community as you heard... And they understand, we're Americans, we stand up for this country. We have rules and we have the rule of law," said Susan, 61.

"We are seeing among our friends who were leaning towards Trump and defending him a few weeks ago, kind of questioning that support more and more and more," said Eric, 62.

But Virginia's second congressional district is a mixed bag politically. It encompasses blue urban areas like Virginia Beach, Hampton and downtown Norfolk along with huge military bases and rural areas that are deeply red.

That's why some people say the audience at Luria's town hall was not representative of the district as a whole.

"I think it's representative of the Democrats perhaps in her district," said Jack Wilson, Chairman of the Virginia Republican Party who led a small protest outside the  the town hall. "Frankly, if you look at the polling data, her constituents, this is a Trump district and she ran as a moderate democrat in order to work with the President, and now she's calling for impeachment."

I think it's a big waste of time. Just like Mr. Trump says, it's a witch hunt. There's nothing here. We need to get on with moving the country forward and stop moving the country backwards.," said Virginia Beach resident, Vincent Smith.

Retired Navy veteran Joe Deleon was reprimanded by church leaders for heckling Luria during the town hall. He told reporters after the event that he thought the impeachment inquiry was a farce.

"If she continues this farce, she is going to get voted out by the district and I like her. She's a good congresswoman as far as many issues, but this farce against Trump is terrible," Deleon, 70, said.

But Luria says politics didn't weigh into her decision.

"I made this decision truly based on what I thought was right, and whether it has implications on my future election prospects in 2020, I want to be able to look in the mirror and look and say that I was on the right side of history and not that this had any sort of political ramifications," Luria said.