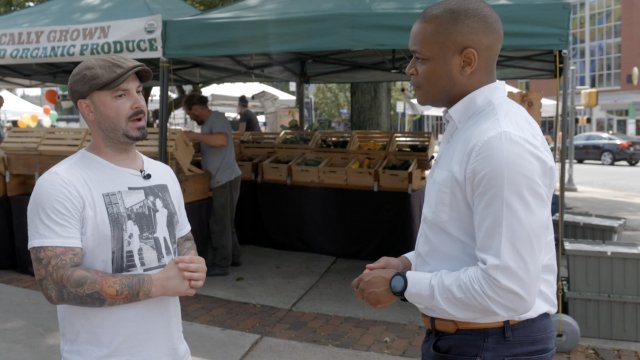 By Willie James Inman
August 22, 2019
Newsy spent a weekend in Northampton County, Pa. talking to voters about President Donald Trump and how they feel ahead of the 2020 election.
SHOW TRANSCRIPT

"I think he's just speaking loudly and making people think that he's doing something because I know people's lives that have not changed [since] he's taken office," one woman said.

Every Saturday, conversations like this are probably taking place in beauty salons and barber shops throughout the country.

But the one taking place here at First Class Fabulous hair salon is pretty significant. That's because it's in Northampton County, Pa., a bellwether that could help decide the outcome of the next presidential election.

Newsy spent a recent weekend here talking to voters representing a wide swath of the county about their feelings on President Trump, his handling of US race relations, and the 2020 election. With 14 months to go before Election Day, we found some voters have already made up their minds and others are taking their time to decide.

What goes through your mind when you think about race relations and what the president has said so far?

"Honestly my son goes through my mind,"said Deedrae Drysdale, owner of First Class Fabulous salon in Easton, Pa.      "I think about my son and his generation and how it's really kind of going to affect things that are happening now are going to affect him. I feel as though the [current] president [the] things that he's doing [are] very dangerous."

Drysdale is originally from Jamaica and is now a U.S. citizen. Most of her customers are black and are part of a small portion of Northampton. The county is just 5% black and 86% white.

But politically the area is nearly split. President Barack Obama won the county by about 12 points in 2008 and 5 points in 2012. President Donald Trump flipped the county in 2016 with about 50 percent of the vote, and with it turned Pennsylvania red for the first time since 1988.

Nearby the salon at the local farmer's market in downtown Easton. George Dodig, a local chef, describes himself as an independent who would vote for a Republican but --not-- President Trump.

"I did have two other choices but I felt that neither candidate supported the issues I was concerned about." Dodig added. "Also I just didn't feel that either one was going to do any job better than the other. I guess in retrospect I wish I would have voted Democrat because I felt that since Trump has become president...I guess I feel that Hillary would have represented a little bit better."

Dodig says he's looking at Democrats and waiting to see if a Republican challenger does well in the primaries.

Independent voters backed president Trump by seven points according to 2016 exit polls. And they are particularly key to the president's re-election chances here in the Keystone State. In Northampton County 39,000 voters were registered with a party other than Republican or Democrat in 2016. Trump won the county by less than 5500 votes.

Farther north in the county at the 74th Annual Blue Valley Farm Show, voters said that being sick of the president's rhetoric didn't mean they would abandon him in 2020.

"From one to ten I would give him a ten, he's doing fine," said Kenneth Brewer. "Just...he's got to stay off of Twitter,"he said. --What do you not like about his Twitter feed?-- "I don't like...he can feel what he feels but stay off of Twitter and he'll be fine.

Brewer gives the president high marks overall despite being concerned about the trade war. He used to be a farmer but is now retired.

His wife Karen describes the couple as 'moderate conservatives' and so far, their happy with the way things are, but she does have one tip for the commander in chief.

"It's not what you say but how you say it," said Karen Brewer. "You can speak the truth but don't call people names. Because then you degrade yourself and I think he has degraded himself and maybe has lost some credibility with people who voted with him before. Because it's like okay, at least be professional about your position because you are the president of the United States."

In conversations with nearly two-dozen voters here we found that not everyone is tuned into the election. Especially since swing states like Pennsylvania don't get much attention until the general election kicks off.

Sunday morning we spent a bit of time at a diner in Nazareth. Robin Faust is a lifelong resident of Pennsylvania and says the president has delivered.

How are you so confident that he can win over the voters once again here in Northampton County?

"When you watch these rallies he does it's unbelievable the people [of] all races and ages and everything they're at and they're all so excited and behind him and I just can't see how I think that's going to keep growing more because he is like an average person," said Robin Faust.

Faust says she thinks there's a silent group of voters who are hesitant to say they support the president but will vote for him next year.

But some of the most important voters in this county are those like Clara Loria. She's voted for Republicans in the past but is now considering a vote for a Democrat depending on who wins the primary. She says she votes based on the person not the party.

Here's What's In Pres. Biden's Budget And How He Plans To Pay For It