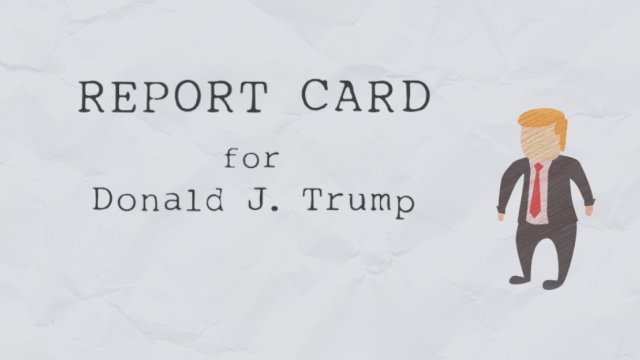 Don't you just love a reminder that presidents are just like us? They go to work, celebrate things with their closest friends and get report cards they probably don't want to take home. Well, at least President Trump has.

A new Morning Consult/Politico poll asked voters to grade the president on "subjects" like the economy or health care or immigration. So how did he do? Not great, especially overall.

Fourteen percent of voters gave him a "C," while 11 percent shelled out a D for his overall year-one performance. And as you can imagine, the partisan breakdown was extreme. 72 percent of Republicans gave Trump an A or B, while 79 percent of Dems gave him a D or an F.

Let's dig further into some of the subjects, shall we? First, where did the president score well?

When it comes to the economy and jobs, 42 percent of voters gave him an A or B. That shouldn't be surprising. The economy has been on a steady uptick for years and unemployment is around 4 percent.

"These are positive trends that have continued in the first year of Donald Trump's presidency and voters are happy with those," Shepard said.

His scores on fighting terrorism are his next highest, but it's not all good news. The same amount of people (39 percent) gave the president an A or B as gave him a D or F on that issue.

"President Trump has tried to always appear tough on the idea of particularly international terrorism here in the United States, and that's a place where, at least a good segment of voters, even if it's not a majority are fairly satisfied with his performance thus far," Shepard said.

So where'd the president not do so hot? Immigration and health care really stick out here. On immigration, which has been a major focus for the president, 46 percent gave him a D or F. His calls for a wall along the southern border and rescinding of DACA have been pretty unpopular.

And when it comes to health care, the failure to fully repeal and replace Obamacare as promised helped lead 48 percent of voters to stamp the president with a D or F.

Most presidents lose popularity (and congressional seats) during their first year. Trump's already seen his record-low poll numbers dive even further; we'll have to wait until the midterms to see if his majorities in Congress follow suit.