How A 2013 SCOTUS Ruling Is Affecting The Midterms 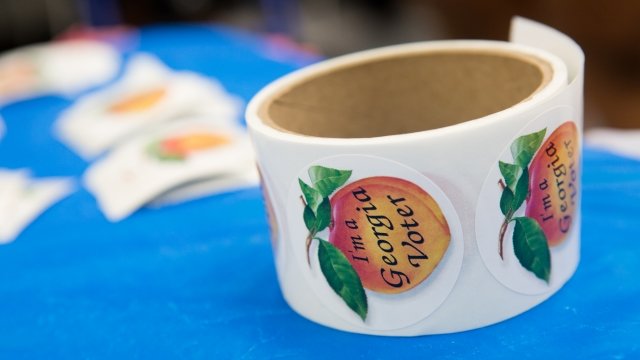 The term "voter suppression" has come up a lot ahead of the midterms.

WHITE HOUSE: "We don't support any type of voter suppression. What we do support is voter integrity."

MSNBC: "You have people that are talking about voter suppression."

CSPAN: "We have seen widespread and rampant voter suppression efforts."

More recently, that term has been used to describe voting issues affecting minorities in North Dakota, North Carolina and Georgia — where Stacey Abrams is taking on Brian Kemp, the person charged with overseeing voting in the state.

Abrams: "Voter suppression isn't only about blocking the vote, it's also about creating an atmosphere of fear."

Kemp: "We are following the law in Georgia."

"Fifty-three thousand Georgians suspended from the voter rolls because, essentially, they may have missed a hyphen, or they may have had an accent wrong on their voter application. And all of a sudden, they're not able to vote in the same way that regular voters can."

And that's not all: A federal judge ruled that Georgia state election officials could not toss out absentee ballots with mismatched signatures without allowing voters to correct their mistakes first. That's after hundreds of ballots were rejected in a mostly minority county.

Voter suppression is an election season buzzword connected to voting laws. On the one hand, those laws — like voter ID — are meant to ostensibly protect the democratic process of casting a ballot.

On the other hand, some voting laws have been proven to disenfranchise minority voters. This cartoon from the 1800s criticizes the use of literacy tests used to dissuade black voters after emancipation.

The Voting Rights Act of 1965 sought to eliminate discriminatory practices in voting, but a 2013 ruling by the Supreme Court invalidated a key part of that law. After that ruling, some state legislatures responded by implementing stricter voting rules.

We spoke to Rolling Stone senior writer Jamil Smith about how that 2013 ruling might've opened the door for present day claims of voter suppression and what that means for the midterms.

SMITH: "It let the reins loose, essentially. That 2013 decision, Shelby County v. Holder, essentially struck down and neutralized section five of the Voting Rights Act, which was preclearance. Preclearance meaning that a rule, like Brian Kemp's exact match law in Georgia, would have had to pass muster with the Department of Justice before it could have been enacted — and in 2008, that actual rule was rejected under that same provision. ...

"The logic that John Roberts and the courts tried to use is that essentially, 'We don't need rules like that anymore. America is past that.'"

Here's Chief Justice John Roberts in his own words in 2013:

The Brennan Center for Justice reported earlier this year that the SCOTUS ruling in Shelby County v. Holder played a role in states purging 16 million voters from the rolls between 2014 and 2016. That's 4 million more than between 2006 and 2008.

Thousands of voters in Georgia weren't necessarily barred from casting their ballots, but the process was much harder for some of them.

Kemp is overseeing the state's race for governor — and he's also a gubernatorial candidate.

Smith had this to say to those voters who might've been deterred:

"If you have a problem at the polls, if you've been stripped from the rolls, if you can't get back on and make sure that you vote, at least try to make sure that at least you vote a provisional ballot. But if you can't get on rolls in the way that you want to, make sure people know about it. Tell your local congressman. Tell the media. Tell us so we can spread the word about it, because I think it's just too important to let it be ignored."