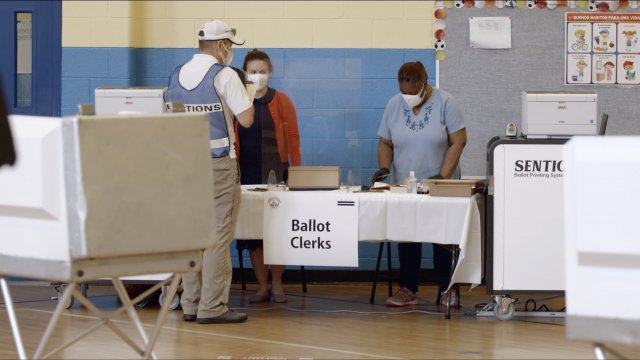 Who’s allowed to be inside polling places?

"So polling places are controlled by state laws, and for the most part polling places can only have poll workers, campaign sort of watchers who are appointed and approved by local election officials," said Lonna Atkeson, the director of the Center for the Study of Voting, Elections and Democracy at the University of New Mexico.

Nearly every state has a law banning electioneering near a precinct or early voting location. But states vary on how far away campaign efforts need to be, with limits ranging from 30 feet to 300 feet from the entrance to the polling place.

"Protesters can be outside. The media can be outside. Politicians, candidates themselves can be outside — you know trying to shake your hand and ask for your vote at the last minute. But in almost all places, none of those people can be inside the polling place," said David Hawkings, the editor in chief of The Fulcrum.

As a voter, some states also put limits on what you can wear.

"You cannot wear anything that indicates the candidate that you are supporting, or the political party that you are supporting. Because you do not want to violate the rights of others, or intimidate others in the area, because it's viewed as a way of campaigning," said Khalilah Brown-Dean, an associate professor of political science and Senior Director for Inclusive Excellence at Quinnipiac University.