Volunteers Deliver Equipment To Ukrainian Troops On The Front Lines 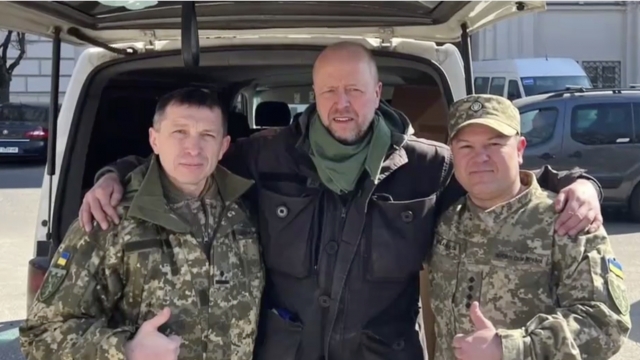 SMS
Volunteers Deliver Equipment To Ukrainian Troops On The Front Lines
By Jason Bellini
By Jason Bellini
March 24, 2022
Ukraine's army is growing by the day as reservists and volunteers from home and abroad deploy. But there isn't enough protective gear to go around.

In the crowded cab of a delivery van on a road to a war zone, Jonas Ohman is fighting exhaustion.

Ohman is Lithuanian. He's from a country many believe is next on Russia's invasion list — if Putin can't be stopped in Ukraine. So his mission is to do whatever it takes to get the Ukrainians the gear they need to hold the line.

The vans are stuffed with high-end consumer gear that the Ukrainians are using to supplement the military grade equipment coming in from the west.

The Kremlin has said it will target any attempts to re-supply the Ukrainians, so Ohman has learned to not ask — or answer — too many questions.

BELLINI: Where are those from?

Ohman allowed Newsy to ride along with him and Raivi Kisielis, who is a Lithuanian-born American volunteer, on an equipment run. The trip started in Vilnius, Lithuania, stopped to pick Newsy's Jason Bellini up near Warsaw and continued across the Ukrainian border for a drop off near Lviv.

Ukraine's army, with 170,000 active-duty troops, is growing by the day, as tens of thousands of reservists and volunteers from both home and abroad suit up and deploy. But there just isn't enough protective gear to go around.

Ohman says Ukraine's military has, in theory, a process in place for procuring and issuing standard equipment.

OHMAN: In practice, we are here because it doesn't work. ... There are lots of new units or people returning from retirement, so to speak, and they need basic gear. ... The next level is regular forces who have a certain amount of support but need maybe drones or thermal vision or something a little more sophisticated.

BELLINI: And you're getting that stuff?

BELLINI: But these are non-lethal drones?

OHMAN: Yeah. We have one now with us. It's for blocking and taking over enemy drones.

BELLINI: And this is kind of stuff that you can buy just kind of off the shelf?

OHMAN: Well, it depends. We are talking about huge amounts of these things and you have to get them into the European Union. It's a very different level and we are still learning to play on this level.

BELLINI: Are those consumer or military grade?

RAIVI KISIELIS: In U.S., consumer military grades are very like...

KISIELIS: Yes. It's a blurry line there.

Ohman spends most of the ride on his phone, responding to messages and calls from his network of contacts buying gear, coordinating logistics, and fielding requests from Ukraine military units on the front line. The call during the drive, he says, came from a squad embroiled in fierce fighting in northern Ukraine.

OHMAN: They ask if I can help. Actually was able to get them some body armor and helmets, stuff like that, at least.

Calls come in from individuals he got to know over the past eight years. His organization, called "Blue and Yellow," began supporting Ukraine's army in 2014, when fighting began with Russian separatists in the Donbas region.

OHMAN: We saw the Ukrainian army back then [was] very, very, very poorly equipped. Lots of problems. And realized that, for our own interest, we got to support these guys. ... I didn't know at that point, of course, when that big war would come. But I knew that it will come sooner or later.

And when it came a month ago, money began pouring in.

OHMAN: We suddenly had a couple of million Euros.

And volunteers began to just show up.

KISIELIS: [The] first week, I was watching on TV, sitting in my recliner, pouting and foaming and drinking, and then I realized, 'Well, that's not going to change a thing.' So, it took me three days [to] sober up and then just bought a one way ticket. Feeling much better not watching the news, but doing something to change it.

That desire to do something is shared by Blue and Yellow's donors.

Ohman's in the process of ramping up purchases of vehicles for Ukraine's army.

OHMAN: Basically, cars that are sturdy and can withstand a war.

The ad hoc process of supplying Ukraine's military takes an army of volunteers, including couriers who make dangerous dashes, bringing Ohman's supplies to the front.

Volunteers — fighting and non-fighting — are Ukraine's secret weapon in its battle against what was a far-better-equipped Russian army.