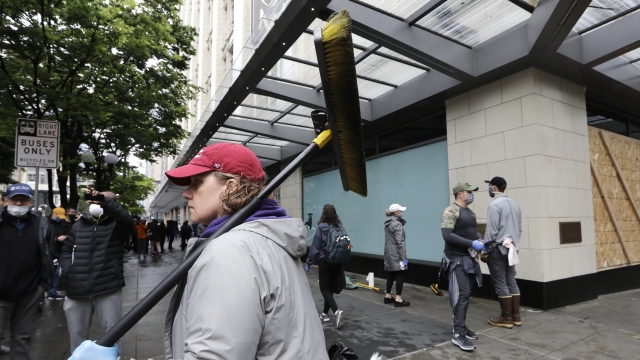 SMS
Volunteers Clean Up Damage Following Protests
By Bailey Vogt
By Bailey Vogt
June 1, 2020
Locals are cleaning up their communities as protests over the death of George Floyd continue.
SHOW TRANSCRIPT

As protests over the death of George Floyd continue across the United States, volunteers have begun cleaning up the damage left behind.

In downtown La Mesa, California, hundreds of volunteers painted over graffiti and swept up debris after violent protests Saturday. John Douglas helped clean up after the engineering firm where his wife works was burned to the ground.

"I've heard nothing but positive things from everyone today. Couple of bad comments from people driving by but that's one bad seed. If that doesn't spread there is no cancer. And so today has been a good day," Douglas said.

While Douglas said he empathizes with the protesters' calls for justice, he told Newsy's sister station KGTV he doesn't believe destroying property is the right answer.

"I saw signs last night like 'Racism sucks' and Black Lives Matter.' Well what about the Black lives that got affected by this?"

Across the U.S., cleanup efforts took place in cities like Atlanta, Chicago, Washington, D.C., and Minneapolis, the city where Floyd was killed.

Suad Hassan, whose family owns several businesses in Minneapolis, told the Associated Press she and her family have stood in front of their businesses since protests began, dissuading people from damaging their stores.

Hassan says she doesn't believe the people destroying businesses are from their community. And she said being there to stop protesters has spared them for now.