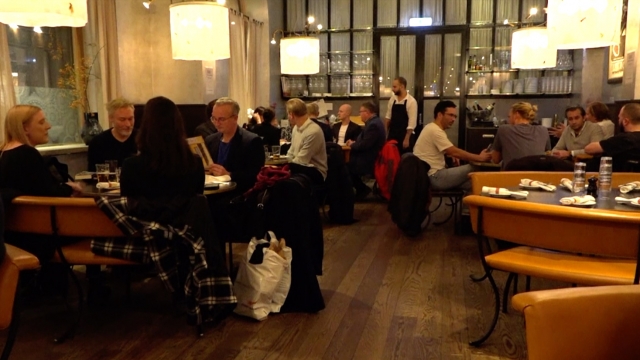 SMS
Virus Surge Tests Sweden's Soft-Touch Approach
By Ben Schamisso
By Ben Schamisso
November 24, 2020
Strains on medical services have pushed the government to take stricter measures. But critics say they might not be enough.
SHOW TRANSCRIPT

Near-normal life continues in Sweden as the country's light-touch approach to the pandemic is being tested by surging cases and hospitalizations.

Strains on medical services have pushed the government to take stricter measures, including banning public gatherings of more than eight people and prohibiting the sale of alcohol after 10 p.m.

"The rule of eight is for public gatherings. It doesn't apply to schools, libraries, all sorts of private events," said Kelly Bjorklund, a freelance journalist covering the pandemic in Sweden.

Besides the new rules, all other advisories in place — such as avoiding non-essential mixing — are just recommendations.

Anders Tegnell, the architect of Sweden's approach, admits too many aren't following the advice.

"During the spring this worked really well. We managed to get people to stop meeting each other to a great extent. If we can get back to that level of follow up on our advice, I think we can handle the situation also during this fall," Tegnell said.

Critics say relying on people to do their part voluntarily can only go so far — especially after Tegnell himself downplayed the severity of the virus.

"Anders Tegnell has been giving the message all summer and into the early fall that our immunity was going to keep us from having a large second wave. And that hasn't been true," said Andrew Ewing, a professor of chemistry and molecular biology at the University of Gothenburg in Sweden.

Another point of contention: the Swedish public health agency does not encourage people to wear masks — despite growing criticism from the Royal Swedish Academy of Sciences, which awards Nobel prizes.

Ewing is a member of the academy.

"We have about a one percent compliance with wearing masks in this country. It's definitely an issue," Ewing said.

"Right now, if someone wears a mask, it's like you're an alien from another planet," Bjorklund added.

Sweden's strategy relies on Swedes following health guidelines without being forced. In return, the country hopes to minimize the negative economic and social impacts that come with a lockdown.

There's broad support for the country's policies even though Sweden's total death toll is more than four times the combined number of its Nordic neighbors, which have all imposed tougher measures.

And while Sweden's economy is not suffering as much as hard-hit countries like the U.K. and Spain, it is faring worse than its neighbors Finland, Norway and Denmark.

"To let a lot of people die and get nothing for it is a disaster. There's no other way to describe it," Ewing said.

Ewing welcomes the new sense of urgency from the Swedish government. But he says it's now time for Sweden to put words into action.

"The government started out with a herd immunity strategy. And then they went to basically no strategy. And we want to see a real strategy," he said.