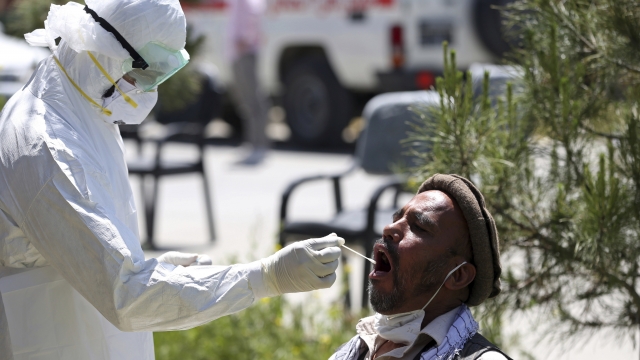 SMS
Virus Surge Feared In Afghanistan As Rumors Swirl Over Taliban Leader
By Peter Hecht
By Peter Hecht
June 3, 2020
The Taliban says its leader is fine despite reports he may have contracted COVID-19 or died. But an aid group warns virus "disaster" may hit country.
SHOW TRANSCRIPT

An international aid group warns that Afghanistan may face a COVID-19 "humanitarian disaster" because the country's health care system has been "devastated" by decades of war.

The report by the International Rescue Committee comes as Afghanistan's Taliban rebels are disputing reports their supreme leader has been infected with the virus and may have even died. They say he is fine.

But the Rescue Committee says Afghanistan isn't fine - and could face a coronavirus catastrophe. That's because the country has extremely limited virus testing. And Afghanistan's health ministry says it's been unable to process nearly 90 percent of test samples.

As of Wednesday, Afghanistan reported more than 16,000 coronavirus infections and only 270 deaths.

But don't tell the Paktiyawal family of Kabul there's no COVID-19 emergency in Afghanistan. The family last month buried three aamembers who died of the disease.

Behtarin Paktiyawal, who recovered from the virus, grieves for two brothers and a sister. He says: I never believed in this disease. I used to say it is a lie, it is propaganda and this and that. For me it was just a rumor." Now he says, "It is a very huge danger."

More than 30 percent of Afghans who get results are testing positive for coronavirus. Vicki Aken, the country director for the International Rescue Committee, says only 1,000 daily results come in from more than 10,000 tests taken.

Aken said: "They can only report on the positive tests and they only have the ability to do so many tests. We know from our field staff and from our own staff frankly that there are a lot of reports of people who have COVID-like symptoms."

One result under dispute involves the Taliban leader, Mullah Haibatullah Akhunzada. Foreign Policy reported Monday that senior Taliban officials said he was ill and may have succumbed to the virus. The Taliban tweeted Tuesday that the report was "propaganda" and that its leader was "busy with his daily activities."