Despite White House Pressure, Schools Across The Country Go Virtual 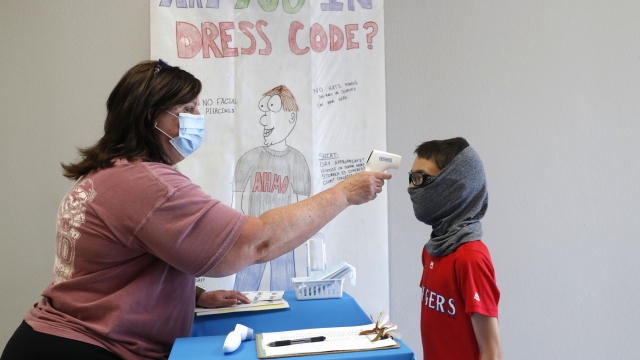 Despite demands from the president for in-person learning, schools across the country are opting to go 100% online.

Despite demands from the president for in-person learning ...

“We have to open the schools. We have to get them open,” said President Trump.

Schools across the country are opting to go 100% virtual.

Districts in Los Angeles; Nashville; Broward County, Florida; Atlanta; Arlington, Virginia; and Indianapolis are among a growing number that won't be returning to the classroom in person in the fall.

But how the plans are carried out varies. In Arlington, Virginia, for example, schools will start virtually in September with the hope of transitioning some students to classrooms by October.

There's a similar plan in Austin, Texas, a COVID-19 hot spot. The Austin Independent School District will go virtual for the first three weeks of the school year.

The president says the decision to keep schools closed is politically motivated, but members of the White House Coronavirus Task Force say schools need to base reopening plans on what’s happening in their area.

"If you're in a situation where you're in outbreak mode, then you leave it up to the local individuals,” said Dr. Anthony Fauci.

“Children in general that don't have preexisting conditions, you know, aren't being treated for cancer or other medical conditions actually do quite well with the virus. In fact, so well, most young adults, we don't even know that they're infected because they have no symptoms,” said Birx.

While that may be good for children, it’s part of the concern among teachers who fear contracting the virus themselves.

A new study from the Kaiser Family Foundation found one-quarter of teachers “have a condition that puts them at higher risk of serious illness from coronavirus.”

“I love teaching. I love getting energy from students, seeing them grow in their families. But I don't want to jeopardize their lives, my life or the lives of their family,” said Cheryl Bost.

Cheryl Bost is a fourth grade teacher and president of the Maryland State Education Association.

“I get questions every day from educators: 'Well, what if a student doesn't want to wear their mask?' 'How is a student supposed to be in a shop class? I'm supposed to clean all the equipment.' 'What happens if there's an outbreak?',” said Bost.

Bost’s group, along with the Baltimore Teachers Union and the Maryland PTA,  sent a letter to Gov. Larry Hogan and the state’s superintendent saying the lack of personal protective equipment and the challenges of enforcing social distancing are among the reasons to enact distance learning, at least in the beginning.

“Instead of focusing our attention on trying to get PPE and masks and everything and get the computers and get the digital, let’s focus on one thing. ... Then we can start transitioning groups at a time into an in-person, once we make sure that all of those products, safety protocols and health protocols are put in place,” Bost suggested.

But she says even that takes funding to make sure students and teachers are properly equipped with computers and access to the internet, something they struggled with in the spring.

The American Academy of Pediatrics has repeatedly stressed the physical and psychological need for kids to be in the classroom.

But it, too, says the answer is funding, to cover everything from PPE to Medicaid. In a letter Wednesday, it called on Congress for help.