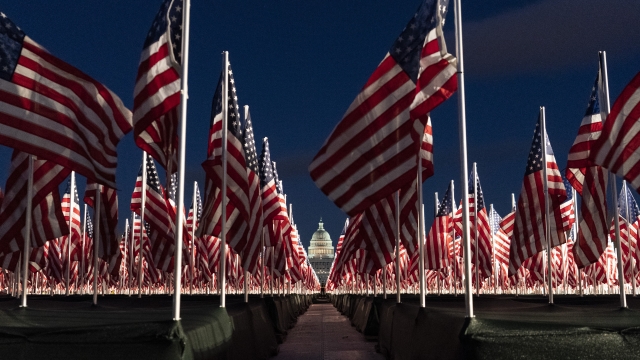 The inauguration of President-elect Joe Biden kicked off this Saturday with a string of official virtual events — live-streamed concerts, a digital "field trip" for students and even a virtual day of service for Martin Luther King Jr. Day.

It's a historic moment happening during unprecedented times, and in lieu of the events or watch parties that would typically happen in physical spaces around the country, folks are gathering virtually.

Manny Yekutiel: "I do think it's important  for us to be together in these moments. .... We are lucky that we live in a time where we can share moments with people even if you're not physically together."

Manny Yekutiel is the owner of Manny's — a San Francisco restaurant, bookshop and venue that hosts political speakers and civic organizing events for liberal causes. Over the past two years, Manny's has planned over 1,000 events, and during the pandemic, it's pivoted to virtual talks, outdoor activities or drive-in watch parties for events like the Biden-Trump debates.

Manny's is one of several organizations hosting a virtual watch party for the inauguration, providing political experts and live conversation for viewers on Zoom. It’s an event Yekutiel considers bittersweet for Democrats.

Yekutiel: "The bitterness of it is, of course, the insurrection on the Capitol, the fact that the inauguration is under military watch, and the fact that most of us aren't going to be able to see it ourselves. ... What I'm trying to get out of my watch party is a sense of community and togetherness to try to make the bitterness a little bit sweeter."

Other unofficial virtual events happening during inauguration week include virtual yoga sessions, book readings for kids, and live-streamed lectures on politics, race and culture. That last event was organized by Washington, D.C.'s Busboys and Poets — a restaurant, bookstore and venue that annually hosts an Inaugural Peace Ball.

These pivots to virtual spaces have been common throughout the pandemic, but once it's safe, Yekutiel says he's excited to once again organize political events in-person.

Yekutiel: "My mission is to make politics physical, right? Like, I brought Cory Booker to my space so that people see him and hear his voice. And so I believe there will be a renaissance after this pandemic is over in the not-too-distant future, and I cannot wait for it."