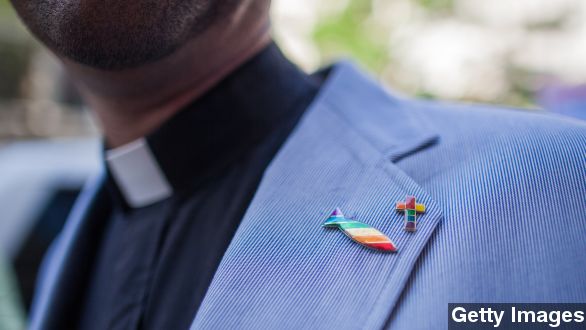 By Jake Godin
July 28, 2014
The U.S. 4th Circuit Court of Appeals has ruled Virginia's same-sex marriage ban unconstitutional in the latest in a string of similar rulings.
SHOW TRANSCRIPT

In what is increasingly looking like the norm for states prohibiting same-sex marriage, a federal appeals court struck down Virginia's ban on gay marriage Monday. (Via Getty Images)

In the majority opinion Judge Henry Floyd wrote: "We recognize that same-sex marriage makes some people deeply uncomfortable. However, inertia and apprehension are not legitimate bases for denying same-sex couples due process and equal protection of the laws." (Via U.S. Court of Appeals)

It's worth noting that North Carolina, South Carolina and West Virginia are all under the 4th Circuit's jurisdiction and have challenges to their same-sex marriage bans similar to Virginia's still pending, meaning those bans could easily see the same fate.

In fact, News & Observer reports North Carolina's attorney general Roy Cooper has already said his state won't defend its ban, saying, "There are really no arguments left to be made."

A writer at The Huffington Post says, based off the court's decision for Virginia, clerks in the 4th Circuit states could issue marriage licenses now, although opponents of same-sex marriage are likely to ask the court to stay its decision until the matter is decided by the Supreme Court.

This ruling is the latest in a trend of decisions since the Supreme Court struck down the federal ban on same-sex marriages in 2013. (Via Getty Images)

Virginia has joined ten other states that have had their bans ruled unconstitutional. Every other state either allows same-sex marriages or has had their ban challenged in court by one of the more than 70 pending lawsuits filed.

But USA Today notes Virginia's case stands out for three reasons: the state is in the South, where gay marriage isn't as widely accepted, it was the first time a state attorney general at the appellate level refused to defend a ban since 2013, and the lawyers for the plaintiffs are the same ones who challenged California's ban last year.

North Dakota was the last state in the nation to have its ban challenged, when seven couples sued the state in June.