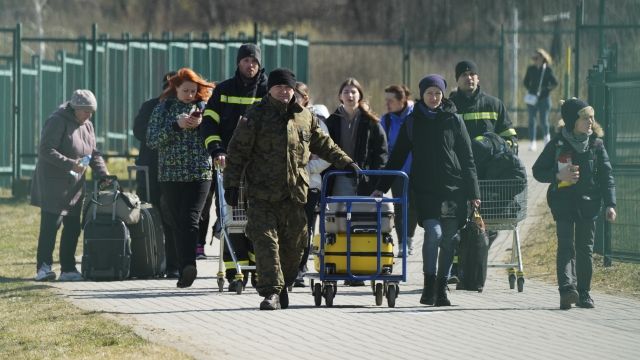 A Virginia man is just back from Poland, where he spent nine days helping Ukrainian refugees cross the border to safety.

Pichel is a freelance advertiser by trade. He also teaches animation at Virginia Commonwealth University in Richmond, Virginia. So when he decided to spend his spring break helping Ukrainian refugees escape Russian President Vladimir Putin's war, his loved ones were hesitant.

"My family and friends are like, 'You're nuts!' But I felt like it was just another one of my projects and I was going to go out and do it," Pichel said.

Pichel packed a bag, flew to Warsaw, Poland, rented a car, and from there, began looking for people to help.

"I had a sign and I used Google Translate to say 'I can give you a ride, I only speak English, I can take three people and your pets. So I held that sign up," said Pichel.

He said large organizations were already providing food, but what people really needed was transportation.

"What's happening is, buses and cars are coming out of Ukraine and dropping people right at the border. Some had plans, some had no plans — so those people, I would just give them rides to wherever they wanted to go," Pichel said.

He said the rides were anywhere from two to seven hours across Poland. One group Pichel helped, a Georgian family who left the country in 2008 when Putin invaded there, was now forced to flee Ukraine and make its way to France.

"So it was a mom, a dad, they had a 15-year-old special needs son and a 3-year-old. Being able to give them money to help their journey — everybody was crying in the car," he said.

Pichel paid for the trip on his own, but said eventually word got out about his efforts and people wanted to send him money. He’s collected about $10,000 so far, and all of it is going to Ukrainian families in need.

Pichel is no stranger to freelance humanitarian aid; in 1999, he traveled to Kosovo to help refugees during the war, and says helping is always an easy choice to make.