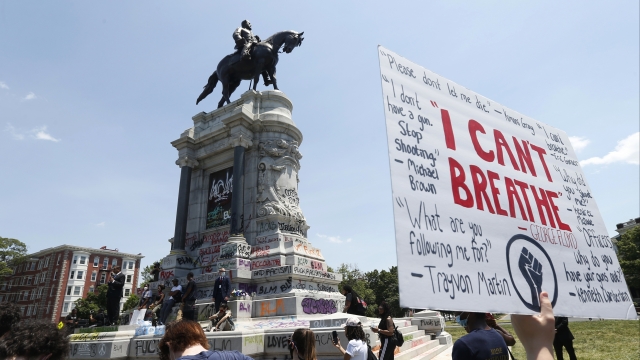 Virginia Gov. Ralph Northam announced that a statue honoring Confederate Gen. Robert E. Lee is coming down. The decision to remove it came after days of unrest in Richmond over the death of George Floyd, a Black man who died after a White police officer pressed a knee on his neck.

The statue, now covered in graffiti, is located on Monument Avenue in Richmond, Virginia. Northam said he directed the Department of General Services to remove the statue "as soon as possible" and put it in storage while they "work with the community to determine its future."

"But make no mistake — removing a symbol is important, but it's only a step," Northam said. "It doesn’t mean problems are solved. There are still monuments of inequities that exist in our commonwealth and in this country. We still need change in this country. We need healing."

Protesters say the statue and many others represent a history of racism. Others have argued such Confederate statues shouldn't be destroyed because they're part of the historical record of the country.

Richmond Mayor Levar Stoney said he and a city council member are going to introduce an ordinance on July 1 to remove all Confederate monuments on Monument Avenue.