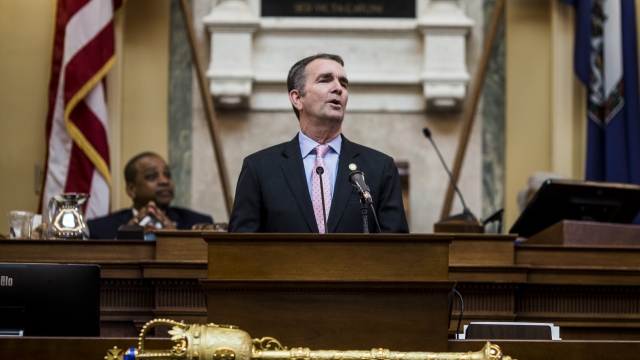 SMS
Virginia Gov. Declares State Of Emergency Ahead Of Gun Rights Rally
By Katherine Biek
By Katherine Biek
January 16, 2020
The state of emergency bans firearms and other weapons from the Virginia State Capitol grounds.
SHOW TRANSCRIPT

Virginia Gov. Ralph Northam issued a temporary emergency declaration ahead of a gun rights rally in Richmond on Jan. 20.

The state of emergency bans firearms and other weapons from the Virginia State Capitol grounds. It'll go into effect Friday and will last until Tuesday evening.

Northam said he made the decision after law enforcement received credible intelligence that out-of-state militia groups and hate groups are expected to attend the demonstrations.

"No one wants another incident like the one we saw in Charlottesville in 2017. We will not allow that violence and mayhem to happen here," Northam told reporters Wednesday.

A woman was killed and dozens of others injured back in 2017 after James Alex Fields Jr. drove his car into a crowd of people protesting a "Unite the Right" rally. A review of Charlottesville's response to the rally criticized local police and found the city's lack of coordination and preparation created "disastrous results."

The Virginia Citizens Defense League is organizing Monday's rally to protest proposed gun control legislation. The group is encouraging demonstrators to keep the protest peaceful. It expects as many as 50,000 people to attend.