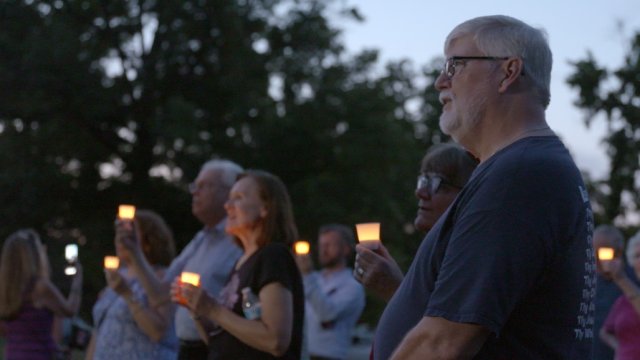 Here in Alexandria, Virginia, at a grove planted earlier this year to memorialize the 2007 Virginia Tech shooting, a candlelit vigil is being held to commemorate another Virginia tragedy.

August 12 marks two years since Heather Heyer was killed protesting the Unite the Right rally in Charlottesville. Concerned citizens, community organizers and elected officials gathered in Chinquapin Park to both remember what happened in Charlottesville, and to confront the ongoing problem of white nationalism.

"As a black man living in America, who follows these things, also as an attorney -- I’m familiar that white nationalism poses a huge threat to the United States," said Mohamed E. "Mo" Seifeldein, a member of the Alexandria City Council. "It’s been an issue that I’ve always been mindful of. But I think the silver lining is now it’s coming to the forefront,which I think will mobilize more people to fight against this wicked ideology."

"I’m not the type of person whose going to go ahead and say that the president is responsible directly for the violence that occurs in this country -- of course he isn’t, and to say so would be absurd -- but you know, people tend to be more restrained when their leaders show restraint," said memorial attendee Joshua Farrar. "I wish the president would stop engaging, or using rhetoric which dehumanizes people, and makes it more likely that these unpredictable acts of violence will occur."

Members of Congress, like Democratic Congressman Beyer are pushing for new legislation to combat the rise in this brand of terrorism.

"Everything is a hurdle in the U.S. Senate these days with Mitch McConnell. But I do think we’ll pass the House," said Beyer. "And it has a pretty good chance of passing the Senate. This shouldn’t be a partisan issue. We need state and local police departments to report hate crimes, or else we won’t know what’s happened. We want to make sure that we’re dealing effectively with hate crimes. If we don’t know that they exist in the first place, we can’t do much."