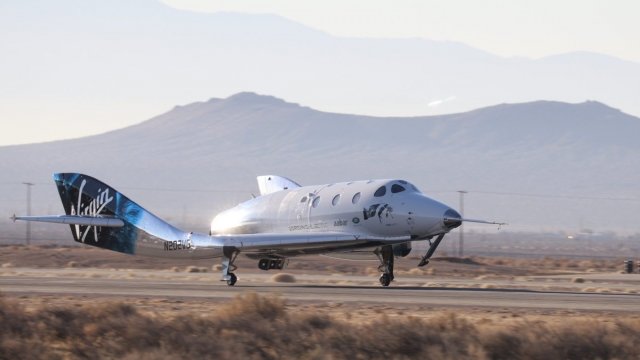 The company's SpaceShipTwo launched from the Mojave Desert in California Thursday morning. It was flown by a larger carrier plane before being released and firing its rockets.

From there, the spacecraft and its two pilots traveled about 2,200 miles per hour, reaching a maximum height about 51 miles above the ground — which is the edge of Earth's mesosphere.

Technically, the pilots didn't reach outer space, which is generally defined as 62 miles above sea level. But that didn't stop Virgin Galactic from welcoming its ship to space.

The company is working toward space tourism, so part of this test flight was seeing how the craft performed with increased weight. Since the ship only had two pilots on board, it also carried four payloads for a NASA research program to simulate the weight of commercial passengers.

The successful flight is a big win for Virgin Galactic in the space tourism race. It beat multiple other companies, including SpaceX and Blue Origin, to this milestone.

It was the fourth powered test flight for SpaceShipTwo. The craft safely landed about an hour after takeoff.