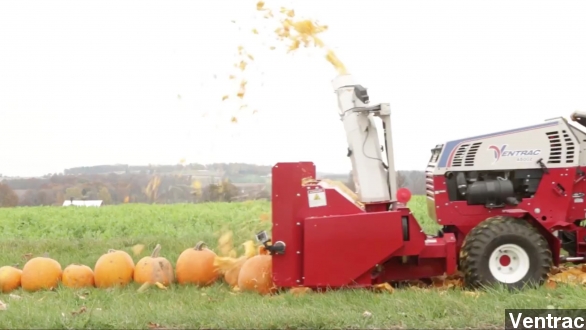 SMS
VIRAL: Snowblower Blasts Pumpkin Chunks Into The Sky
By Christine Slusser
By Christine Slusser
November 3, 2014
Tractor company Ventrac lined up 100 pumpkins that would have been left to rot and demolished them in a minute with a tractor and a snowblower.
SHOW TRANSCRIPT

OK, so Halloween is over — what would you do with all your leftover, half-carved orange squash? (That's our fancy way of saying pumpkins.)

We know what some peeps over at Ventrac in Orrville, Ohio, would do, at least. Line up 100 of them and blast them to the skies. And it looked really cool, too.

That's a Ventrac 4500 with a snowblower attached. And don't worry about food waste; these pumpkins were left over from a local pumpkin patch and were going to be left to rot in the ground.

The company decided to have some fun instead. Why not line 'em up and destroy 'em?

We talked to Isaac Roth and Denver Steiner, who's the director of information services with Ventrac, and they explained they never really had a chance to show off what their snowblower could do because they actually don't get much snow in their area.

So ... show it off with pumpkins instead, right?

STEINER: "In our area, we haven't had a lot of snow, at least deep snow, in the last couple years. ... Pumpkins was a way to show that our snowblower's legit and it does good work."

ROTH: "Our snowblower can go through about 3 foot. ... We don't get a lot of that type of snowfall."

The guys told us it took about a minute to demolish all the pumpkins, and we may see some more from them next year.

That we'd like to see — machine vs. giant pumpkin. Throw a flying shark into the mix and it could be a Syfy movie.

You can watch the full pumpkin epicness on the company's YouTube page.