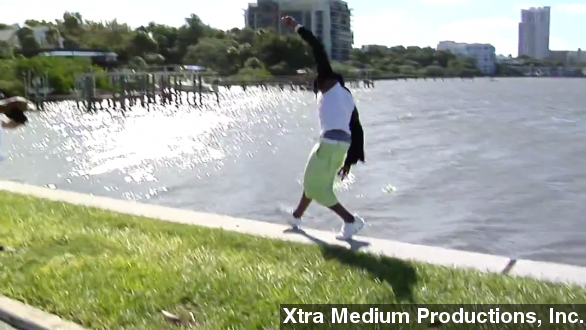 Florida rapper Presto Flo made headlines Wednesday not for his music, but rather his fall ... into some very cold water.

Presto Flo's hat flies off his head, he falls into the water.

We spoke to Presto Flo on Skype, and he admitting that while the fall was pretty funny, it didn't feel too good — even landing him in the hospital.

PRESTO FLO VIA SKYPE: "I got hurt very bad. I wish I could show you everything, but this is just my hand."

As for how he toppled into the water and landed on an oyster bed ...

PRESTO FLO VIA SKYPE: "It was originally the wind took my hat, and my natural reaction was to reach up and try to grab it, and that's when I lost balance, and I stepped back and it was coldness. ... I thought my life was over."

The rapper, who's based in Clearwater, Florida, was filming a documentary about his life when he fell.

PRESTO FLO VIA SKYPE: "It has me speaking about my struggles, you know? And how bad that my passion burns."

The video is getting Presto a lot of attention with more than 1 million views so far and plenty of media attention.

One anchor even said she sympathizes with the rapper because she, too, took a tumble this year.

Laughter after he falls.

ANCHOR VIA E!: "I went A-over-teakettle off a boat this summer."

Despite all the press about his fall, Presto Flo has been keeping his spirits up ... and presumably his head above water.

And who knows — maybe the video will get people to take notice of his music, too.

This video includes an image from Facebook / Presto Flo and music from Wake / CC BY 3.0.