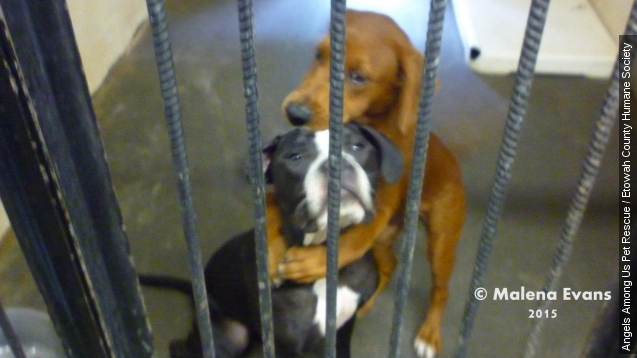 Let's hear the collective "awww." The adorable pic of these two hugging pups helped save their lives.

Meet Kala and Keira. They were rescued from a Georgia shelter by nonprofit Angels Among Us Pet Rescue and a local humane society right before they were scheduled to be euthanized.

The photo totally tugs at your heartstrings, and it's no surprise it went viral. It was on nearly every major TV network.

"Aww, look at that beautiful photo. ... The power of social media," an NBC anchor said.

"Still hugging, this time one of the volunteers in the middle who helped save them," an ABC anchor said.

Originally, Angels Among Us Pet Rescue posted a Facebook plea from Kala's point of view that said:

"The people working in the shelters see how scared we are but just told each other that today is our deadline. We have to have someone rescue us or we'll be 'next.'"

Two hours and 6 minutes after that post, the dogs' lives were saved.

Kala, an 8-month-old hound mix, and Keira, a 1-year-old boxer mix, are currently staying with a foster mom until they find they find their forever homes.

As of Thursday, the dogs were still available for adoption.

This video includes images from Angels Among Us Pet Rescue and music from Kevin MacLeod / CC BY 3.0.