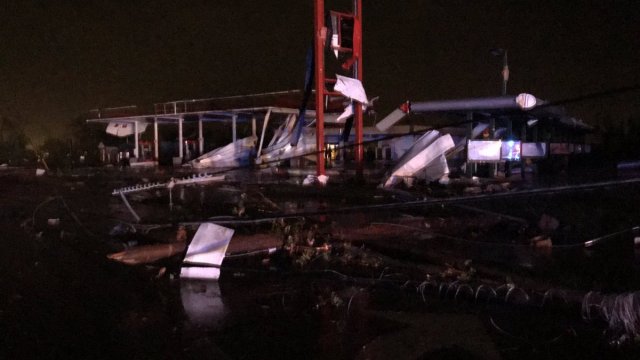 Missouri officials confirmed at least three people were killed and multiple others hurt after a tornado touched down in southwestern Missouri near Golden City.

The storms hit exactly eight years after a massive tornado killed more than 150 people in Joplin, Missouri. It was one of the destructive tornadoes in U.S. history.

Meanwhile, Oklahoma was faced with a different threat during Wednesday's storms — flooding.

Officials in the eastern town of Webber Falls issued a mandatory evacuation order as the Arkansas River continued to rise. They advised people to leave as soon as possible and instructed anyone staying put to write their personal information on their arm in permanent marker.

Wednesday's storms were part of a severe weather outbreak that's been pummeling the Plains and Midwest this week. The storms have killed at least seven, caused significant flooding and structural damage and forced highways to close.