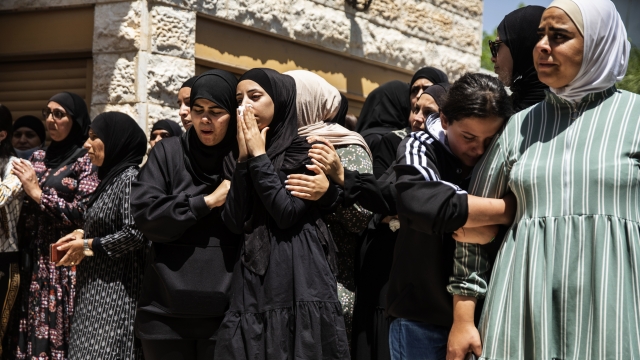 SMS
Violence, Rocket Fire Escalate In Middle East
By Simon Kaufman
By Simon Kaufman
May 12, 2021
Israel's military says more than 1,000 rockets have been fired over the last 48 hours.
SHOW TRANSCRIPT

Israel's military shared video of its Iron Dome defense system intercepting rockets over the southern part of the country overnight.

It says more than 1,000 rockets have been fired over the last 48 hours.

Israel says it will ramp up its retaliatory attacks on Hamas, the militant Palestinian political party that operates out of Gaza. Israel says it killed key Hamas leaders, including the head of its military intelligence security department and his deputy.

Gaza officials say dozens of civilians have been killed, as well. The death toll is now at over 40 Palestinians, including at least 13 children.

Israel says at least 15 of those killed were militants. And it says its goal is only to take out those behind the attacks sending out warnings to civilians in Gaza, telling them to stay away from places where Hamas operates.

At least six Israelis, including a child, have died after rocket attacks there. In an address last night, Prime Minister Benjamin Netanyahu said Israel will continue to attack Hamas targets with full force.