Syria's Eastern Ghouta: 'A Catastrophe In Every Sense Of The Word' 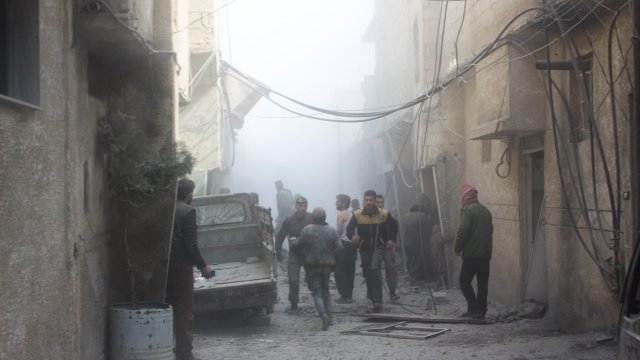 SMS
Syria's Eastern Ghouta: 'A Catastrophe In Every Sense Of The Word'
By Jake Godin
By Jake Godin
March 1, 2018
Valerie Szybala of The Syria Institute says the international community has failed Syrians in resolving the government's brutal sieges.
SHOW TRANSCRIPT

This is Eastern Ghouta. It's an area made up of suburbs and rural communities that lies just east of Syria's capital Damascus. Slowly, over the course of the past five years, it's been transforming into rubble.

That's because of a relentless campaign of airstrikes and brutal siege by the Syrian government and its allies. In February, the violence reached unprecedented levels.

Szybala is the executive director of the D.C.-based Syria Institute. Together with PAX, the Syria Institute documents sieges in Syria. Newsy spoke with her about the one in Eastern Ghouta. 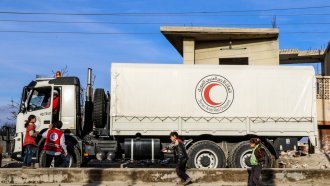 In Syria, Aid Might Take Months ... If It Comes At All

"The area has been attacked nonstop pretty much since 2013. But starting Nov. 14, the attacks escalated extensively … the Syrian government and its allies Russia and Iran are trying to force the area to surrender and capture it and forcibly displace or kill a large portion of the population," she said.

The recent escalation in Eastern Ghotua has left hundreds dead and many more injured. Hospitals and aid workers are targets, and there've been multiple suspected chlorine attacks just in the past month. In short, the situation is dire in Eastern Ghouta.

"People on the ground are pretty, as you can imagine, hopeless, defeated; they've given up. They know they've been abandoned, and they're right," she said.

It's part of a "surrender or die" strategy that the Syrian government has employed many times in the past.

"The government and its allies have developed a campaign of sieges. … They escalate intensively, destroying civilian infrastructure, bombing, starving people to death, until the enclave falls to its knees, and it forcibly deport civilians, which is one of the many war crimes being committed here," Szybala said.

And, if past sieges like Eastern Aleppo or Homs serve as a blueprint, things are not going to get better in Eastern Ghouta.

"It's hard for someone like me who have so closely followed and been in touch with people with so many other cases where this surrender or die strategy has led to surrender and death without international efforts to stop it. It's hard for me to have the imagination to see how this could go any differently. The response of the international community has not been up to this challenge, they've failed. We've all failed," she said.