Metal Detectors Lead To Violence Between Israelis And Palestinians 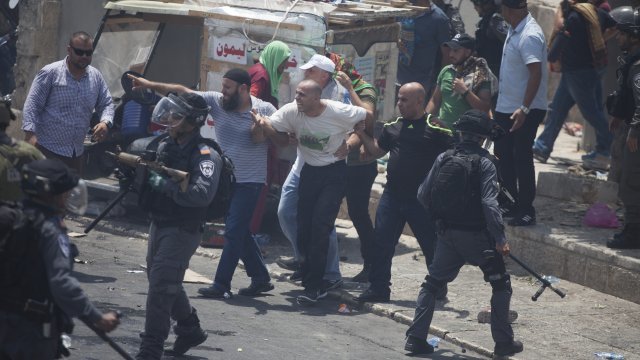 SMS
Metal Detectors Lead To Violence Between Israelis And Palestinians
By Matt Picht
By Matt Picht
July 21, 2017
At least six people are dead after new security measures sparked a day of violence in East Jerusalem and the West Bank.
SHOW TRANSCRIPT

Violent clashes between Israelis and Palestinians have left at least six people dead.

Palestinian protests across Jerusalem and the West Bank on Friday left three Palestinians killed. The Palestinian Red Crescent said around 450 people were injured in the chaos, largely from rubber bullets and tear gas inhalation.

Separately, four Israeli settlers living in the West Bank were stabbed by a Palestinian who entered their home. Three of the victims died, while the fourth was hospitalized. The attacker was reportedly shot by a neighbor; his condition is unclear.

The current conflict centers around new security measures Israeli police set up around what's known as the Temple Mount to Jews and the Noble Sanctuary to Muslims. Police installed metal detectors at the entrance days after an attack in which three Arab Israelis killed two Israeli police in the area.

Palestinians have largely viewed the metal detectors as a power grab. Palestinian President Mahmoud Abbas cut off all official contacts with Israel over the detectors, and the measures have been condemned by majority-Muslim countries.

Israeli Prime Minister Benjamin Netanyahu said the metal detectors will stay up for now but added he will have "additional security consultations" in the future about the issue.