Violence, Fires Break Out After Fatal Police Shooting In Milwaukee 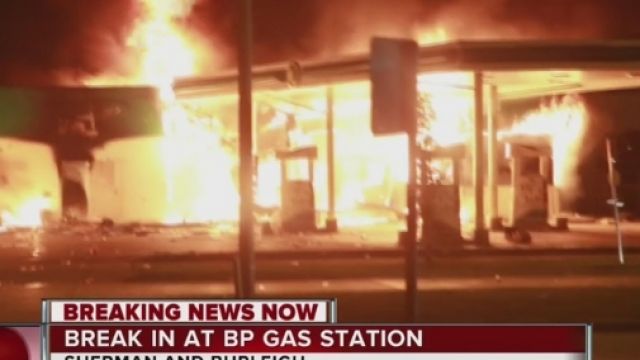 "If you're a mother who is watching this right now, and your young son or daughter is not home and you think they're in this area, get them home right now," Milwaukee Mayor Tom Barrett said.

Barrett made that plea early Sunday after a protest over a fatal officer-involved shooting turned violent Saturday night.

According to Newsy's partner's at WTMJ, it started when two men fled a traffic stop in the city's Sherman Park neighborhood Saturday afternoon. During the chase, an officer shot one of the suspects who police say was armed. The 23-year-old suspect died at the scene. The gun recovered was reportedly taken during a burglary in March.

Several people looted a gas station and set it, as well as a few other buildings, on fire.

"The firefighters did not go immediately to the gas station because gun shots throughout this entire period were being fired in this area," Barrett explained.

A local news station spoke with a man who said he is the brother of the victim.

"You got a city riot going on because once again the police has failed to protect us like they say they was going to do," the man said.

One police officer was hospitalized after being hit in the head with a brick. A police car was destroyed and a few others were damaged.

Barrett's plea came hours after he spoke about a violent Friday night and Saturday morning in the city. There were nine shootings and five people were killed.