Tuesday Impeachment Hearing Recap: 'It Was A Moment Of Shock' 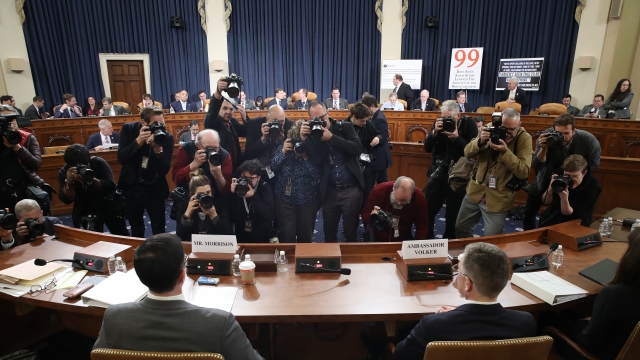 SMS
Tuesday Impeachment Hearing Recap: 'It Was A Moment Of Shock'
By Alexandra Miller
By Alexandra Miller
November 19, 2019
Lt. Col. Alexander Vindman said the president's phone call to Ukraine "was my worst fear of how our Ukraine policy was playing out."
SHOW TRANSCRIPT

Four witnesses testifying in pairs on Capitol Hill Tuesday. Three of them were on the July call between President Donald Trump and Ukrainian President Volodymyr Zelenskyy and say their firsthand knowledge left them troubled and concerned.

"Frankly, I couldn't believe what I was hearing. It was a moment of shock. It was my worst fear of how our Ukraine policy was playing out and it was going to have significant implications for U.S. national security," Vindman said.

Vindman says he immediately reported the call to the National Security Council's lawyer. And it wasn't the first time he'd raised those concerns to the NSC's counsel. He'd done it one other time earlier in the year, after a July 10 meeting where Vindman says EU Ambassador Gordon Sondland raised investigations with Ukrainians. Vindman pushed back on Republican attempts to paint him as a partisan.

Vice President Mike Pence's Russia adviser, Jennifer Williams, testified she also found the call, in her words, "unusual" and "political" and made clear she has no agenda against President Trump. She says she heard secondhand that President Trump had asked Pence not to attend the Ukrainian president's inauguration. That alleged order came in the midst of the White House's alleged pressure campaign on Ukraine. Still, she offered an explanation.

"The vice president had only a narrow window of availability at the end of May, and the Ukrainian parliament would not meet to set a date for the inauguration until after May 14," Williams said.

Republicans, led by Rep. John Ratcliffe, pointed out that though both Vindman and Williams were on the July call, their characterization of the president's conduct differed.

"So two different people. Two impartial observers. One felt the need to report the call because there was a demand that was improper and one that didn't report it to anyone," Ratcliffe said. "And I'm not hearing a consensus between the two of you about what exactly you both heard on the call that you heard at the exact same time. And if you can't reach an agreement with regard to what happened on the call, how can any of us? An impeachment inquiry is supposed to be clear. It's supposed to be obvious."

Less than two hours later, two more officials were in the hot seat. Tim Morrison, the National Security Council's former official in charge of Russia and Europe policy, and former special envoy to Ukraine Kurt Volker, who was part of what Democrats called an "unofficial" or "irregular" channel to Ukraine.

Volker denied he was operating off the radar and he says discussion of why assistance aid to Ukraine was held up was never tied to a demand for investigations.

"I did not know of any linkage between the hold on security assistance and Ukraine pursuing investigations. No one had ever said that to me, and I never conveyed such a linkage to the Ukrainians," Volker said.

Volker's testimony was slightly different than in the past. He previously denied any discussions about investigations during a July 10 meeting. Tuesday afternoon, he altered that.

"As I remember, the meeting was essentially over when Ambassador Sondland made a general comment about investigations. I think all of us thought it was inappropriate. The conversation did not continue and the meeting concluded," Volker said.

Wednesday is expected to be arguably the most crucial day yet for Democrats. EU Ambassador Gordon Sondland is set to testify in the morning, and Deputy Assistant Secretary of Defense Laura Cooper and Undersecretary of State for Political Affairs David Hale will sit before the committee that afternoon.