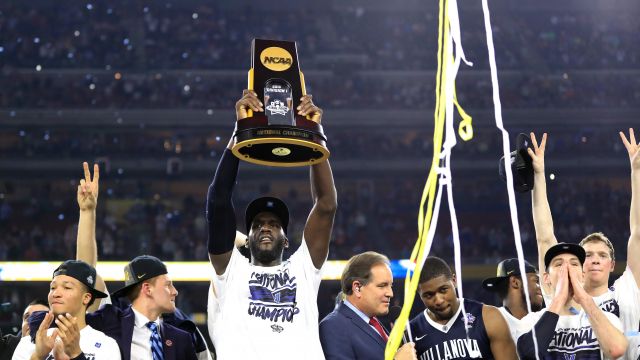 It was definitely a shot to remember: a 3-point attempt from the hands of Villanova's Kris Jenkins with less than a second left in a tied national championship game.

And he absolutely drained it.

The shot is already going down as one of the best in national championship history.

"For it to happen like that — Kris Jenkins, the most clutch three in school history — I'm losing my mind. It's unbelievable," one Villanova student told WCAU.

"This is arguably the greatest end in a national championship game. It's outrageous," a Comcast SportsNet reporter said.

It will forever stand alongside Chris Laettner's 1992 turnaround jumper and Lorenzo Charles' 1983 dunk as one of the greatest shots in tournament history.

An ESPN reporter asked, "Kris Jenkins, you're now a part of history. Your shot will be seen for decades, for a long time. What's that like?"

"It's great, especially because we worked so hard as a team," Jenkins said.

This is Villanova's second men's basketball championship ever, their last coming in 1985.

This video includes a clip from WTXF and images from Getty Images.