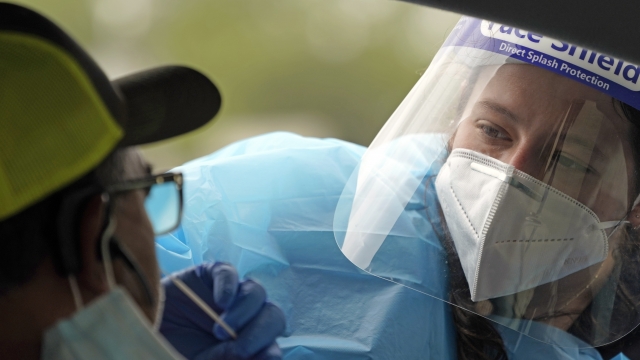 SMS
Views On Coronavirus Have Become Increasingly Partisan
By LeeAnne Lowry
By LeeAnne Lowry
June 26, 2020
Democrats and Republicans are disagreeing more now about whether the coronavirus outbreak is going to get worse than they were in April.
SHOW TRANSCRIPT

As the U.S. breaks daily records for COVID-19 cases, a new analysis from Pew Research Center shows the virus is becoming an increasingly partisan topic.

Three out of four Democrats or Democrat-leaning independents say "the worst is still to come" in the coronavirus pandemic. That's a modest decrease from when a similar survey was conducted in early April.

Meanwhile, 61% of Republicans and Republican-leaning Independents say they think "the worst is behind us." That's a sharp turn from early April, when most Republicans were bracing for things to get worse. Republicans are 40 percentage points more likely to feel comfortable eating at a restaurant than Democrats — more than double the gap months earlier.

And there's also a racial divide: Black Americans have become more worried about unknowingly spreading the virus, while White Americans are less worried.

The next stimulus package is also dividing Democrats and Republicans more. Republicans' support for such a package has decreased since early April, while Democrats still widely favor more aid.

But there are some views on the virus that most Americans can agree on. An ABC/Ipsos poll released Friday shows 76% of Americans are worried about catching the coronavirus — a seven-point uptick in just two weeks. Fifty-six percent think the country reopened too quickly, and about nine in 10 say they've worn a mask in public this week.