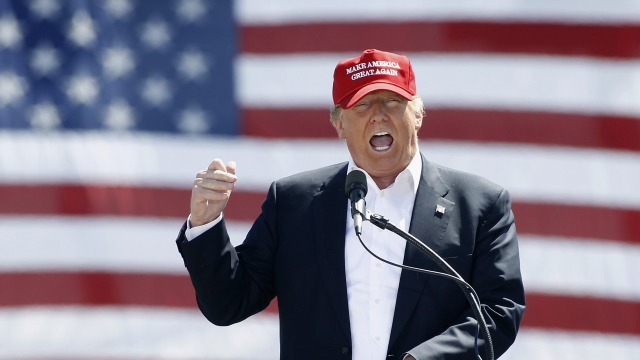 The protester was being escorted out of the rally when a Trump supporter allegedly attacked him.

An anti-Trump protester was punched and kicked repeatedly Saturday while being escorted out of the Republican front-runner's rally in Tucson, Arizona.

A video from Newsy's partners at KGUN shows Bryan Sanders holding a sign while being escorted out with another protester, a woman wearing a hood resembling the Ku Klux Klan's.

Thirty-two-year-old Tony Pettway has been charged with assault with injury for the attack.

Corey Lewandowski, Trump's campaign manager, was also allegedly a part of an aggressive act against a different protester during the Tucson rally.

"I understand that people support Donald Trump, but do they support this kind of scene? Really?" Sanders told an NBC reporter.

Trump has said in the past he would pay the legal fees for supporters who act violently toward protesters.

"Knock the crap out of them, would you? Just knock the hell — I promise you, I will pay for the legal fees," Trump said.

Roughly a week ago, Trump told NBC he'd instructed people to look into paying a supporter's legal fees. Three days later, he told CNN: "Nobody's asked me to pay for fees. ... I never said I was going to pay for fees."

When Trump was asked earlier this month at a Republican debate if he believed his campaign promotes violence, he had this to say:

"There's some anger. There's also great love for the country. It's a beautiful thing in many respects, but I certainly do not condone that at all," Trump said during a recent Republican debate.

"I give him credit for having spirit. He wanted to take down those horrible, profanity-laced signs," Trump said.