Video Shows Officer Yanking Student Out Of Her Desk 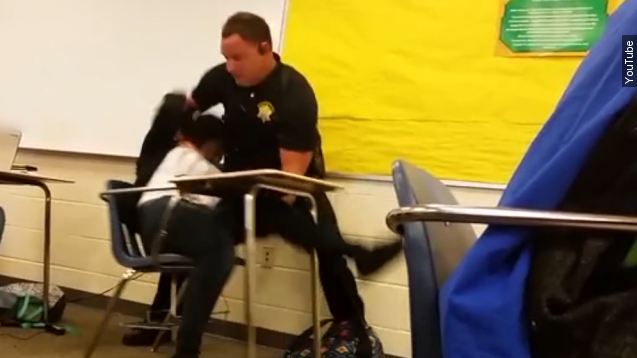 Law enforcement in South Carolina are calling for a federal investigation after a video surfaced that appears to show a school resource officer dragging a student across a classroom.

The person who gave Newsy permission to use the video has asked not to be named.

A female student at Spring Valley High School in Columbia reportedly took out her phone during class and refused to leave when ordered by her teacher. That's when Richland County Sheriff's Deputy Ben Fields was called in to remove the student. (Video via WFXB)

The video appears to show the officer wrapping his arm around the student's head, tipping her over in her chair and then pulling her across the room. It sparked outrage on social media, and the local sheriff's department called the incident "disturbing."

A student in the class spoke to WLTX.

"I've never seen anything so nasty looking. ... That's supposed to be somebody that's going to protect us, not somebody that we need to be scared of or afraid," said Tony Robinson Jr.

The officer has been placed on administrative leave. The student in the video along with another female student were charged with disturbing the school.

"It's real early right now. All we have is the snapshot of going on. It's a terrible snapshot. We have to look at everything," said Richland County Sheriff Leon Lott.

Fields has been sued twice over incidents on the job. The first time he was sued for excessive force, but the jury ruled in his favor in that case. He is currently being sued over another student's expulsion.