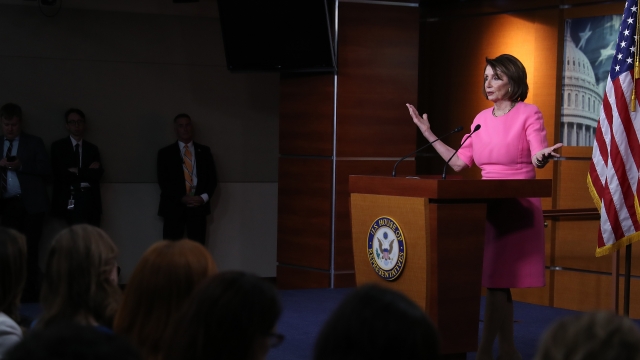 Videos circulating on social media want you to believe Speaker of the House Nancy Pelosi is slurring her speech or stuttering. But both videos are deceptively edited.

Let's look at the first one. It shows her comments during the Center for American Progress Ideas Conference. A video shared on Facebook appears to show Pelosi speaking unusually slowly.

"And then he had a press conference in the Rose Garden with all this, um, sort of visuals that obviously were planned long before I said most currently that he was engaged in a cover-up," Pelosi said in edited Facebook video.

However, compare that version to one from C-SPAN.

"And then he had a press conference in the Rose Garden with all this, um, sort of visuals that obviously were planned long before I said most currently that he was engaged in a cover up," Pelosi said in C-SPAN video.

In the Facebook video, it takes Pelosi 17 seconds to say that sentence. In the C-SPAN clip, she says it in 13 — indicating that the viral social media version was slowed down. Our partners at Politifact spoke to a few experts who noted multiple indicators that the Facebook version was modified.

Another video of Pelosi circulating on social media was shared by President Donald Trump. He tweeted a clip from a Fox Business segment with the comment, "Pelosi stammers through news conference."

However, when you compare the segments in the Fox News clip with the live-streamed press conference, it's clear that the network cherry-picked moments out of context, presumably to paint Pelosi in a negative light.

Fox: "We had long, a little longer on the floor," Pelosi said.

Livestream: "Sorry for the delay. We had a long, a little longer on the floor than I had anticipated," Pelosi said.

Fox: "Custody — custody of the Border Patrol, of the border," Pelosi said.

Livestream: "It's important to note in the 10 years before this, not a single child died in custody — custody of the Border Patrol, of the border. Now six children have died in the last several months," Pelosi said.

The first video is fake because it was edited to adjust the speed. The second video shows things Pelosi said at the right speed, but it suffers from a lack of context and selective editing.