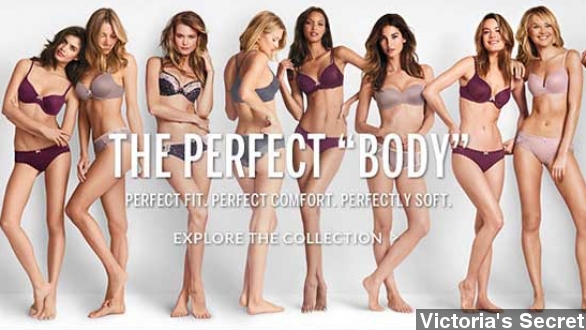 Victoria's Secret seems to have a knack for sparking controversy.

From its first televised fashion show in 2002 — which some described as a televised striptease... (Video via CBS)

...to what critics called culturally insensitive outfits a decade later.

KTVU: And now, an ad for "The Perfect 'Body'": "Customers say it could create low self esteem for women who don't fit that standard and look like the models."

That criticism was the catalyst to this Change.org petition out of the U.K. which, as of Saturday, had surpassed 30,000 signatures. The petition asks the lingerie company to change the wording of the ad and apologize for "the unhealthy and damaging message."

And a replication of the ad that instead showcased women of all shapes, sizes and colors.

It's been about two weeks since the petition was posted and Victoria's Secret has now addressed to one of the requests.

WTMJ: "The company quietly changing its website this week to say 'A body for every body' instead."

The meaning of the new wording remains open for interpretation, especially as Victoria's Secret hasn't released any official statement pertaining to the controversy.

However, The Independent reports it reached a spokesperson for the company who confirmed the change and said more details would be released soon.

Whether those details will include an apology remains to be seen. But the creators of the petition did comment on the revised wording.

They wrote, "This is amazing news! ... However the campaign is NOT over! We still want them to change all of the posters in their stores, apologise and pledge to not use such harmful marketing in the future."

But the ideals of the campaign are not shared by everyone. During a discussion on Fox News a much different point of view was expressed.

"If you feel bad about your body don't open a Victoria's Secret catalog or you will blow your head off. These women are beautiful, get over it.  ... In place of doing this maybe they should have just apologized."

In the past the company has issued apologies for offensive actions, and so far it looks like Victoria's Secret is working to put out the flame in this most recent controversy.