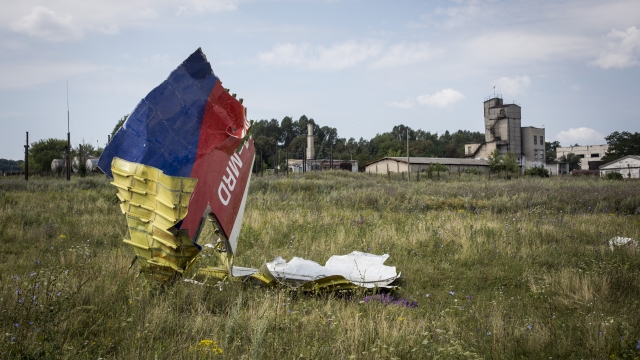 SMS
Victims' Families Sue Russia And Vladimir Putin Over MH17 Crash
By Melissa Prax
By Melissa Prax
May 22, 2016
Five Australian families are asking for millions of dollars for each of their relatives who died in the 2014 crash of Malaysia Airlines Flight 17.
SHOW TRANSCRIPT

Vladimir Putin and the country of Russia are being sued by the families of the victims of crashed Malaysia Airlines Flight 17.

All 298 people on board MH17 were killed when the commercial flight was shot down over Ukraine during its trip from Amsterdam to Kuala Lumpur in July 2014.

The lawsuit comes from five Australian families whose loved ones died in the crash. They're asking for $7.22 million for each of their relatives.

Several countries are still investigating the crash, and it's unclear who shot down the plane.

Some reports have been quick to point the finger at Russia. That's because the Dutch Safety Board's official report on the crash showed that the missile that shot down the plane was Russian-made.

Though the Kremlin was quick to refute those claims.

Still, Russia can settle the lawsuits without accepting blame for the incident.

That's what happened with Libya after the 1988 bombing of Pan Am Flight 103 that killed 270 people. In a letter to the United Nations, Libya took responsibility for the bombing.

In a later settlement with the U.S., the country agreed to compensate the victims' families but not take the blame.

As for flight MH17, it's unclear how Russia or Putin will respond.

This video includes clips from The Kremlin and Dutch Safety Board and images from Getty Images, U.K. Air Accident Investigation Branch and Bryn Pinzgauer / CC BY 2.0.