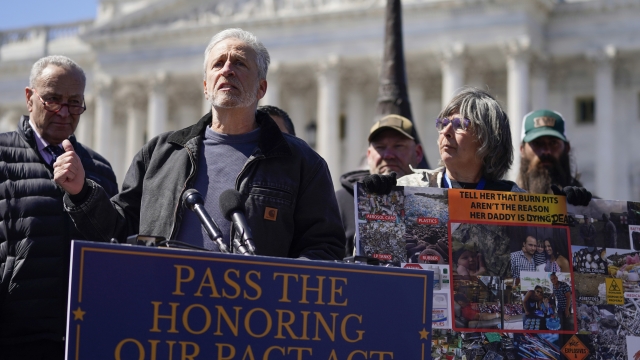 SMS
Lawmakers Push For Expanded Health Care For Vets Exposed To Burn Pits
By Maritsa Georgiou
By Maritsa Georgiou
March 29, 2022
The Honoring Our Pact Act would open health care to millions of exposed vets and provide more disability benefits for conditions linked to the pits.

Ahead of a hearing with the Veterans Affairs Secretary Tuesday, advocates turned up the heat in their fight to help vets exposed to toxic burn pits.

"We need everybody to contact their senators," 9/11 first responder John Feal said.

"You want to do it here? Let's dig a giant [expletive] pit 10 acres long and burn everything in Washington with jet fuel. And then let me know how long they want to wait before they think it's going to cause some health problems," TV host and activist Jon Stewart said. "Here's the bottom line: You cannot be 'America first' when you put veterans last."

Stewart and Feal joined Senate Majority Leader Chuck Schumer and other lawmakers to say they can't wait any longer.

"I'm here to say unequivocally — no doubt — I will fully support the Honoring Our Pact Act and the Senate will vote on it this Congress," Schumer said. "Everyone is going to have to show where they stand."

The military used the pits to get rid of heaps of hazardous garbage in places like Iraq and Afghanistan.

They produced toxic smoke now linked to illnesses that include multiple cancers. It's estimated 3.5 million vets were exposed, but about 70% of burn pit claims have been denied.

Danielle Robinson is the widow of veteran Heath Robinson, whom the legislation is named after.

"I need all of you senators to understand what it is like to lay on the floor underneath your dying husband for seven hours, helping him die," she said. "If you pass this Honoring Our Pact Act, you are going to help so many veterans who are in the same situation, on hospice right now."

The Senate already passed the first phase of another bill that expands benefits, but advocates say that bill doesn't go far enough.

The House didn't take up the legislation, and instead, sent the Senate the now renamed Sergeant First Class Heath Robinson Honoring Our Pact Act.

It would open VA health care to millions of exposed vets. It would also provide more disability benefits for conditions linked to the pits, taking the burden of proof away from the vets.

In a Senate Veterans Affairs Committee hearing Tuesday, lawmakers discussed the price tag — about $300 billion over 10 years — and infrastructure.

"We support the bill for many reasons, but the first is that it helps VA accomplish a priority goal getting more veterans into VA care because study after study shows that vets in VA care do better," Veterans Affairs Secretary Denis McDonough said.

"It also includes provisions that, perhaps, will stretch the VA beyond its operational capacity, effectively providing no guarantee that veterans will be able to access the benefits promised. This bill needs to be amended," Sen. Jerry Moran said.

"Could you, once again, tell me what I should tell the people that say, 'We simply can't afford this kind of expenditure?'" Sen. Jon Tester asked.

"We need to just find a way. This is a cost of war," National Legislative Service at Veterans of Foreign Wars Associate Director Kristina Keenan said.

Where this goes from here is unclear. But bill advocates vowed they won't back down.

"Stop saying you support veterans in theory," Feal said. "Put your name on a piece of paper and do the right thing."

"If somehow you falter on your duty and somehow you come up with a reason why this is too expensive, we're not going away. We will be back. You have our demands," Black Veterans Project Senior Policy Officer Isiah James said.