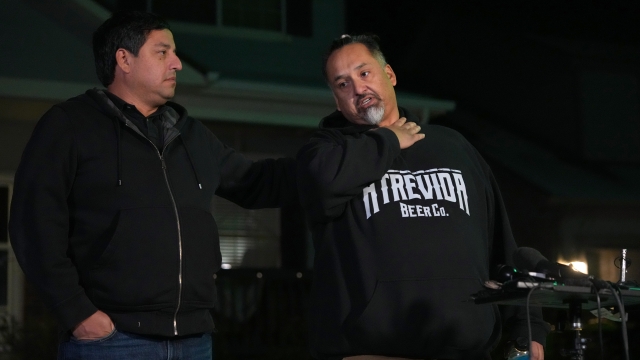 "It was a really great night, and we've talked about it," Richard Fierro said. "That's what we're holding onto. It was a great night, until that changed."

It was a birthday celebration for his family until a gunman entered the club. In the chaos that followed, his wife Jessica got separated from the rest of the family when she fled to the patio.

"I didn't get reunited with my family until we went into the parking lot and once we got there I saw my husband, I saw my daughter and saw my two best friends going into the ambulance," Jessica Fierro.

Richard Fierro says his response to the shooting was a reflex. Fifteen years in the U.S. Army with deployments in Iraq, Afghanistan and Germany instilled a vigilance that kept him ready for combat.

As the gunman started shooting, Richard Fierro smelled cordite; he saw the flash and he acted. He and two patrons disarmed the gunman and beat him into submission, holding him down until police arrived.

By then, five people had been killed, including Raymond Vance, the longtime boyfriend of the Fierros' daughter.

"Everybody protects their family; I said it. Animals protect their family," Richard Fierro said. "It's all that matters. I'm not a hero. I never wanted to be in this situation. I would've hoped that this never would've happened."

Though he won't say himself that he's a hero, people across the country do see Richard Fierro as one. There's a push on social media to buy out all the merchandise at Atrevida, the brewery he owns with his wife. The brewery's motto is "Diversity, it's on tap!"

"Diversity is inclusion," Jessica Fierro said. "It means everybody's welcome. It means all are accepted. It means you and I are both human. That's what it means. It means humanity."

Richard Fierro worries about the aftermath of this attack for the survivors and the victims' families. He says he dealt with violence in the Army; he'd signed up for it. But, nobody in the club did, and now they'll have to live with it for the rest of their lives.